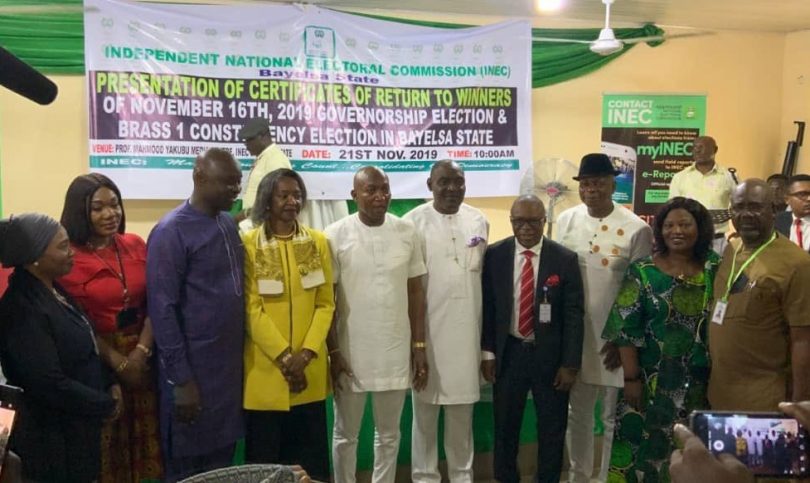 The Independent National Electoral Commission (INEC) on Thursday in Yenagoa, presented the Certificates of Return to the winner of last Saturday’s governorship election in the state, David Lyon and his running mate, Degi Eremienyon.

Lyon of the All Progressives Congress (APC) in the election defeated his Peoples Democratic Party (PDP) rival, Douye Diri to win the Bayelsa election.

INEC also presented a certificate of return to the winner of the supplementary election for Brass State Constituency 1 in the Bayelsa State House of Assembly, Mr. Charles Daniel.

In her remarks before the presentation of the certificate of return to the governor-elect and his deputy, the INEC National Commissioner in charge of Bayelsa, Rivers and Edo States, Mrs. May Agbamuche-Mbu, said the presentation was in fulfillment of Section 75 (1a) the Electoral Act as amended which mandates the Commission to present certificates of return to winners of the election within seven days.

She said the ceremony marked the end of a process that started in May.

The Resident Electoral Commissioner (REC) in Bayelsa State, Pastor Monday Tom, who presented the certificate of return to the House of Assembly member-elect said he was grateful to God that under his watch, Bayelsa State was able to conduct one of the most peaceful and violence-free election in the history of the state.

The governor-elect commended Bayelsans for coming out en masse to vote him as governor and promised not to betray the confidence reposed on him by the people.