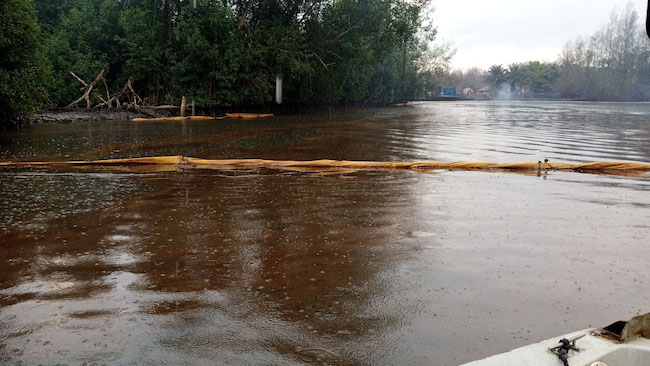 The Bayelsa State government and two regulatory agencies investigating the November 5 oil spill in the Nembe community in the state have disagreed on the cause of the incident.

The National Oil Spills Detection and Response Agency (NOSDRA) and the Nigerian Upstream Petroleum Regulatory Commission (NUPRC) had on Wednesday blamed the incident on sabotage.

The oil spill polluted the Santa Barbra River and Nembe Creeks and destroyed the means of livelihood in the community.

After the leak was plugged on December 8, 16,280 barrels of crude and crude sediments were recovered from the incident site.

A Joint Investigative Visit (JIV) to ascertain the cause, volume and impacted areas resumed on Wednesday following a visit to the area by the Minister of State for Environment, Sharon Ikeazor.

The JIV is a statutory probe that follows every reported leak incident.

The JIV is usually convened by the operator of the leak facility and it comprises representatives of the oil firm, affected communities, regulators, and the state Ministry of Environment.

Representatives of the two agencies in the JIV told journalists after the visit that they traced the leak to sabotage.

NOSDRA’s representative in the JIV, Ismail Baba-Ahmed, said based on his experience in fluid mechanics and interactions with wellhead experts who plugged the leak, only vandalism could have caused the spill.

He said the threading on the wellhead casing from where the valve was removed was not worn out, a development that suggests that the leak was not caused by pressure.

His NUPRC counterpart, Adetoyibo Adeyemi, added that a physical examination of the failed wellhead revealed that the pressure from the oil well was not sufficient enough to blow it.

The Head of Pollution Control, Bayelsa Ministry of Environment, Enai Reuben, however, described the inspection as inconclusive.

Reuben, who spoke with journalists on Thursday, said since the JIV team could not see the exact point of the leak, it would be inaccurate to draw a conclusion on the cause of the spill.

He said: “It will be inaccurate to draw a conclusion without seeing the leak point. In an investigation, it is called an evidence-based conclusion.”

He wondered why the wellhead could not be preserved for evaluation after the leak was stopped.

Enai Reuben, head of Pollution Control, Bayelsa Ministry of Environment, however, told reporters that the inspection was inconclusive because the JIV team could not see the exact point of the leak.

Mr Reuben said it would, therefore, be inaccurate to draw a conclusion on the cause of the spill.

“It will be inaccurate to draw a conclusion without seeing the leak point. In an investigation it is called evidence-based conclusion,” he said.

He wondered why the wellhead could not be preserved for evaluation after the leak was stopped.

Police arrests suspected supplier of arms to bandits in Katsina