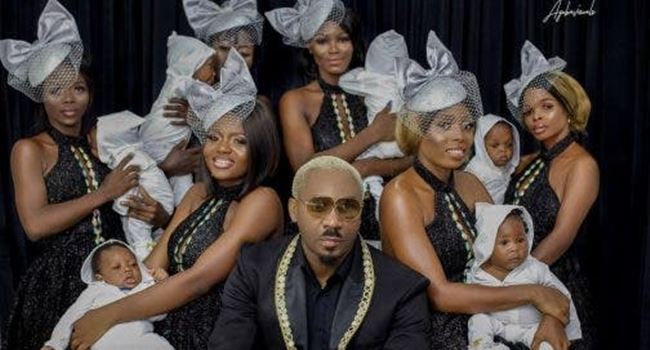 Nigerian socialite, Pretty Mike is renowned for his controversial gimmicks at wedding ceremonies.

On Saturday, June 12, at the wedding ceremony of his close friend, Toyin Lawani, Pretty Mike employed six women to push a stroller with babies in it.

Expectedly, his methodology caught the attention of the guests at the ceremony and he is currently making the rounds on social media.

A post shared by The Tattle Room 🇳🇬 🌎 (@thetattleroomng)

Former Minister of Aviation, Femi Fani-Kayode took to his Instagram page during the early hours of Saturday, June 12 to gush over his new lover, Chika Nerita.

He shared a video of Nerita on Saturday morning with the caption;

Recall the flamboyant politician revealed he found love again a couple of weeks ago, and this time in the hands of beauty queen, Miss Ezenwa Chika Nerita.

Nigerian recording artiste, Cynthia Morgan has revealed in an Instagram post that she has been battling some heinous forces in the spiritual realm.

According to the Reggae artiste and rapper, she has been able to oppose the enemies through the grace of God, however, the forces still want her dead.

“Damn have been fighting all night on top say person get prophetic calling. Ivbie Nigeria and Edo state in particular…azen uwa bun gbe. I am unto you all now,” she wrote.

“I will tell you all I have been fighting since I was a fetus. It’s too late to kill me now. I dey here full ground. You all tried in 2018 but it didn’t work. I am ready to expose you all”

Ghanaian HIV positive actress, Joyce Dzidzor, debunks claims she infected any man in the industry with the virus

Former HIV/AIDS Ambassador, Joyce Dzidzor Mensah has dared Ghanaian men; including actors to take her to court if they feel she infected them with HIV.

Joyce who said this after testing positive for HIV on a live TV show, said her threats are addressed to Ghanaians in Germany who have vowed to have her prosecuted over an allegations of deliberately infecting them with the deadly virus.

The actress had this to say;

“I have no explanation to offer anyone.

I think the more I talk about the issue, the more people get excited to speak ill about me.

I want to tell Ghanaians in Germany that I cannot be moved by your threats.

There are laws that guides actions of HIV infected persons. So if you are a man who have had a sexual affair with me and think I have given you HIV, then go to the police and report me.”

“Some of you may rush to the court.

“I have seen the worse of it.

“Some had taken me to court for having shared a photo on social media about the man responsible for my kids. I dare you to take this action this time on your claim that I have infected you.

“There are some of you who slept with me in your offices and cars.

“And you think I have infected you with HIV, take me to court, lest I will personally take you to court or report you to the police for it because you don’t have the balls.”

The Anambra based preacher was seen performing a miracle on a reverend sister during one of his church services.

Specifically, the preacher leaned on the nun as he pinned her to the ground. He could be heard speaking in tongues before he began to rock her in a suggestive manner.

The moment has raised eyebrows specifically among Christian scholars who perceive the deliverance as awkward and provocative.

Wizkid says fatherhood more important to him than a music career