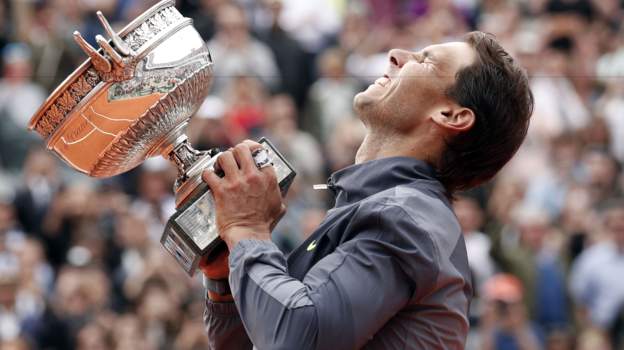 Rafael Nadal defeated Dominic Thiem in the final of the French Open tennis Championship to defend the title he won last year against same opponent.

The Spaniard, who now has 18 Grand Slam titles to his name, is the first player in history to win 12 singles titles at the same Grand Slam tournament.

“I can’t explain what I’ve achieved and how I feel. It’s a dream. To play for the first time in 2005 – never thought in 2019 I’d still be here. It’s an incredible moment and very special for me,” he said.

The triumph on Sunday leaves the 33-year old two majors adrift of Roger Federer, who he beat in the last-four of the competition.

Meanwhile, 25-year-old Thiem, who saw off Novak Djokovic in the semis, suffered his second Grand Slam final defeat having lost in three sets to Nadal in last year’s final.

“Rafa well done. Of course im very sad to lose but youre such an amazing champion and legend of our sport its amazing, 12 times here i will try next year again for sure.”

Nadal now has a Roland Garros record of 93 wins and two defeats.