Home » Latest » Daura is in Nigeria, there’s nothing wrong in siting the University of Transportation there ―Amaechi 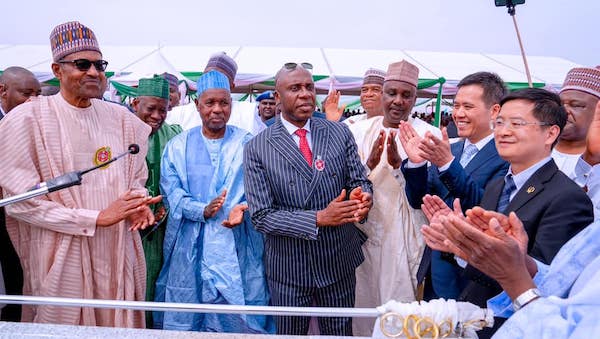 Minister for Transportation, Rotimi Amaechi, has defended the decision to site the transportation university in Daura, Katsina State.

Speaking during the groundbreaking of the university on Monday, Ameachi stated that he had no regrets siting the institution in Daura.

He said the siting of the university was generating controversy only because it was the hometown of President Muhammadu Buhari.

“When we sited the factory at Kajola, there was no noise, nobody debated about it, nobody abused us for it unlike the site for the university,” he noted.

“Daura is in Nigeria, it is not in any other part of the world. It is not in Niger Republic, Biafra or Mali, it is in Nigeria. So, what is wrong in siting the University of Transportation in Daura?

“I have no regret siting this university where I have sited it, it is not because I want to get any gain,” Mr Amaechi said.

The minister said the N18 billion project is financed by the China Civil Engineering Construction Corporation Ltd (CCECC) and China Railway Construction Company (CRCC) as part of a deal he made before signing a railway contract project.

He said the university is an attempt at responding to the question of how Nigeria will maintain the infrastructure within the country.

He said: “It is my attempt at responding to the question of how to maintain and manage all the infrastructure we are building and realised that education is key.

“I engaged the companies, the first engagement was when they were constructing Lagos-Ibadan. They were not so keen at spending their funds to build a university for Nigeria until I refused to sign the contract for the Lagos to Ibadan railway. I insisted that I will only sign if three things were done.

“The first thing is to take our children to China and train them by giving them first degree in railway technology.

“Today as I speak, 60 of our children are in their second year and we thank CCECC and 90 are on their way to China this week, making it 150.

“The second is that, if we must sign the purchase of locomotives in China, they must build a factory were we can construct for coaches, locomotives and wagon and today at Kajola that factory is being constructed. Finally, I insisted on the University of transportation and today we are here for the groundbreaking of the University and for all we are grateful to CCECC and the Chinese government.”

Amaechi commended Aminu Masari, governor of Katsina, for donating about 413 hectares of land for the construction of the university.

On the completion of the project, Fidet Okhiria, managing director, Nigerian Railway Corporation, said the university should be ready by the time of completing the Ibadan-Kano rail.

“We hope that by the time we get the rail from Ibadan to Kano the University should be in place,” he said.