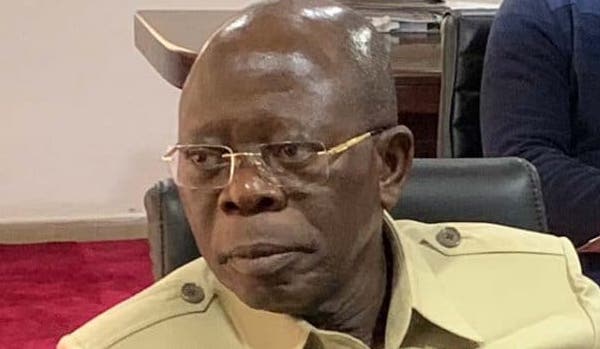 Thursday, August 13 2020: Under the dying embers of a setting sun and in the solemn assembly for a burial ceremony in Ewu town, Esanland in Edo State, mourners still found room to cross swords politically.

It was the wake for the Late Pa Edward Orewele Akhuetie, a nonagenarian pensioner who served the Nigerian Ports Authority (NPA). A mixed multitude of family, friends and community had gathered under canopies erected outside his country-home to await the arrival of the Priests and Catechists billed to conduct the evening mass in honour of the Lagos-based Catholic. As his children and relatives floated around putting final touches to arrangements for the Christian wake and simultaneously appreciating guests who had come to pay their last respects, conversation flowed lavishly under the canopies with home-based folks taking the opportunity to do catch-up with cousins, kinsmen and well-wishers from within and outside town.

Somehow, politics elbowed its way into the fellowship. In no time, two camps emerged: Loyalists to the All Progressives Congress (APC) Governorship Candidate Pastor Osagie Ize-Iyamu and those for the incumbent Governor Godwin Obaseki now in the People’s Democratic Party (PDP). supporters on either side fiercely pushed their convictions. And soon the hush-hush whispers reserved for such a solemn gathering quickly gave way to robust and vociferous exchanges.

“Ize-Iyamu will win the elections hands down and there is nothing anybody can do about it!” belched a man in the Esan language; someone identified him as a community youth leader. The Esan dominate Edo Central Senatorial District. Next to the majority Bini-speaking people who occupy seven out of the state’s 18 local government areas and reputedly constitute 57.14 percent of the state’s about 6 million population, Esan people make up 17.14 percent. The pro-Ize-Iyamu speaker and a few men with him wore caps boldly depicting the “POI” acronym of the APC Candidate.

“What rubbish is this one spewing from his mouth?” retorted a known lecturer of the Ambrose Alli University (AAU) in the nearby town of Ekpoma 13 kilometres away. “Where will Ize-Iyamu get the votes from? I bet you, he will fail throughout Esanland!”

Both men, sitting about 10 chairs apart, quickly drowned other voices in the conversation, as they fiercely flung stones of arguments over the heads of the gathering.

“Come; let us teach you politics because you know nothing about what you are saying!” the youth leader mocked.

Fuelled by the support of people around who cast spiteful glances and voices in the direction of the youth leader and his team, the lecturer sprang to his feet and advanced towards his antagonist.

“Do you know who you are talking to? You should have bothered to first ask around about the identity of the man you are arguing with,” he fired. “Adams Oshiomhole, as Governor, abandoned AAU, starved the school of allocations and diverted the funds to Edo University, Iyamho (EUI) that he established in his hometown. And you want Esan people to vote for his man?”

His rival fired right back: “That you are working in AAU does not mean you know what is happening there!”

“Have the decency to speak sense!” the lecturer said. “I have worked in AAU for decades and I know what I am talking about!”

AAU, founded in 1981, is sited in Ekpoma, part of the old Esan division in Edo State, while EUI was established in 2016 at Iyamho, Oshiomhole’s hometown in Edo North Senatorial District.

“Oshiomhole today wants to play the godfather, after showing disdain for godfathers in his own time. Is he the first governor to rule the state? John Odigie-Oyegun, Lucky Igbinedion and Oserheimen Osunbor all ruled before him and they allowed their successors the freehand to govern without breathing down their necks.”

That sentiment apparently goes beyond Ewu, nay beyond Edo State. Powerful forces at the APC national level are said to have sworn to ensure Oshio’s candidate lost the Edo polls as the final nail on the coffin of the supposedly oversized ego of the disgraced ex-Chairman and thereby bury him politically. Today, Oshio is weaker. Unlike he reputedly did in past elections, he no longer has the faculty to dictate to INEC and security agents, having lost the seat of APC National Chairman (Obaseki engineered his expulsion from the Iyamho APC ward; and having become a persona non grata at home he lost the national position).

“You can rant all you want, Obaseki will fall flat in this election!” the man in POI cap submitted. Then he went on to vilify the Governor for joining PDP and doling out appointments and N15 billion to his new party’s operatives (an allegation since denied by party chieftains like Chief Raymond Dokpesi). “Did he ever patronise us with such an amount throughout his four years with APC? We will show him how to take people for granted!”

The other fired back: “Why is Ize-Iyamu not projecting himself, why is Oshiomhole the one speaking at campaigns and not the candidate himself? Oshiomhole wants a third term and when he could not get it through Obaseki, he now settled for someone who cannot stand up to him. Quite simple, Ize-Iyanmu lacks the character for the position. Oshiomhole already destroyed him in the last election and exposed his dirty linens.”

Actually, Oshiomhole exhibited a certain daredevil cockiness selling as his party’s 2020 candidate the same man he himself grossly de-marketed in 2016 as a fraud, a corrupt and a gangster. Did he not thereby take upon himself an onerous task akin to selling snow to the Eskimos?

A man seated by the lecturer, who had by now returned to his seat, chipped in: “They had to even beg Buhari to allow Iyamu into Aso Rock because the President initially distanced himself from him over the corruption charge he is facing from EFCC. And this is Buhari and APC who say they are fighting corruption. Can you imagine that they jailed Olisa Metuh (former PDP spokesman) for stealing N400 million, but Ize-Iyamu is facing charges of embezzling N700 million and Buhari shamelessly presented him with the flag as his party’s candidate.”

“Yes, now,” came a voice from somewhere. “Oshiomhole already said once you join APC, your old sins have passed away!”

Someone suggested Oshiomhole could have a massive rigging plan up his sleeve, by employing INEC and the Federal might.

“Forget rigging! Any attempt by APC people to rig the election in Esan will be their worst mistake,” someone said and several people raised their voices in acquiescence.

Similar voices of dichotomy, you will discover, percolate through the entire Edo State, that is currently caught in the fever-pitch anticipation of the September 19 election. People have eyes for only two candidates and, all indications show that no dark horses can spring any surprise from the cast of 12 other candidates that filed papers with INEC. The contest boils down to a straight fight between the two main gladiators, the Governor and Ize-Iyamu. With both men switching parties in a very strange twist, new configurations and new loyalties have appeared. For example, the Onojie of Uromi, rabidly opposed to Ize-Iyanmu and PDP in 2016, has this time around embraced PDP because of Obaseki.

Even then, none of the two will be a pushover. The Governor has a formidable pedigree in Edo kingdom, his family name Obaseki depicting “King of the Market,” a hereditary title bestowed upon his forebears by ancient Benin kings, while Ize-Iyamu’s equally venerated family holds the reputation of several traditional titles as well as a forefather reputed to have erected the first story building in the kingdom.

On the other hand, Obaseki wields the incumbency factor. And his formidability receives further reinforcement from his creditable performance both in recurrent and capital sectors. His four years have celebrated the establishment of several landmark industries, the latest being the modular refinery that has the government investing in a PPP arrangement. And on the recurrent side, his regime has consistently paid salaries and pensions promptly, a major headache in previous regimes, while infrastructural development has progressed steadily.

Despite this, however, for His Excellency, too, the election will not be a walk in the park. Apart from the angst his old APC allies have against him over his past thriftiness, Obaseki faces accusations of not opening up the space for jobs amidst swelling unemployment figures. There is also the matter of the gale of last-minute resignations sweeping through his rank of appointees cross-carpeting to APC. He also failed the test of true Statesmanship by his failure to midwife a just and timely settlement in the beleaguered House of Assembly, thus robbing some constituencies of representation for four years.

However, if the recent scandalous Aso Rock video leak signifies nothing else, it shows that APC trembles about its poor rating in Edo’s opinion polls and may resort to extra-electoral tactics. In the video that went viral, Oshimhole appeared to be suggesting to the Chief of Staff to the President, Ambassador Ibrahim Gambari, about the need to use police to forcefully keep powerful Obaseki elements out of circulation. Fears that both sides might resort to other strong-arm techniques may have informed last week’s invitation by the police of Tony “Kabaka,” and other “Tigers” and “Lions,” who usually enforce politicians’ interest. With all sides taking the election as a do-or-die affair, such a pre-emptive security move looks in order, especially amidst speculations that both sides have resorted to amassing arms and hiring hoodlums.

In Esanland, the Oshiomhole-Iyamu team face a worrisome dilemma as the place might prove a hard nut to crack. Reports say Esan monarchs humiliated the two APC henchmen when they sought royal audience this month, and ordered them out of Esanland over the neglect the region suffered during the former Governor’s eight years. The royals also have axes to grind with Oshiomhole over his dethronement of the Onojie of Uromi, His Royal Highness Anselm Aidenojie II. Obaseki later restored his crown. However, if truth be told, the rank of the traditional rulers is divided and Esan’s Enejies are not all on the same page. Breaking away from his colleagues for one is the Ojirua of Irrua, HRH Williams Okuagban Momodu II, who has since showered royal blessings upon the APC Candidate. Meanwhile, Edo’s apex monarch, the Oba of Benin, continues to maintain a dignified aloofness to political affairs and no one outside the palace can read where he stands among the two men.

Conversely, Oshiomhole will swim or sink with his chosen candidate. For a man who prides himself as the destroyer of past godfathers in Edo politics, Oshiomhole may as well prepare to take a dose of his own medicine come September.

CBN to sanction exporters for not repatriating forex