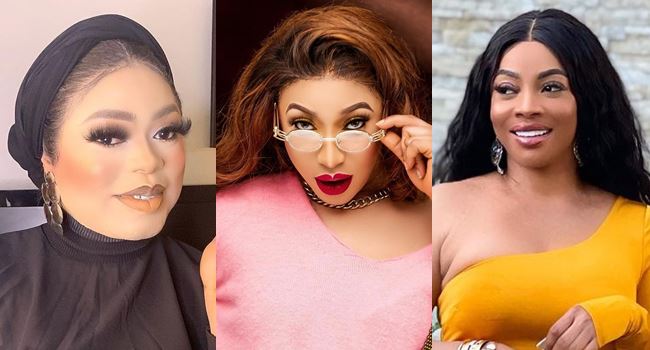 The concept of body enhancement continues to spread in Nigeria, as the number of celebrities undergoing body augmentation continues to increase on a daily basis. It is gradually becoming a norm as several celebrities, especially women are embracing the practice.
It has been on the increase as of recent.

The cosmetic industry in Nigeria started with Modupe Ozolua.

In 2001, she kicked off her cosmetic surgery business and followed up with an aesthetic lasers business in 2007.

Ozolua’s line of business made her popular as she revolutionized the ideology and concept of beauty in this part of the world.

Stars such as Tonto Dikeh to Toke Makinwa have taken it to a whole new level, as the reality star, Nina Ivy also recently joined the burgeoning list. She is the fourth reality star to confirm reports that she has acquired a new physique since her Big Brother Naija Double Wahala colleague, Khloe did hers in 2020.

Ex-housemates, Mercy Eke who won the 2019 Pepper Dem edition also revealed that she went under the knife, as well as BBNaija Lockdown’s second runner-up, Nengi Hampson in 2020.

On a daily basis various methodologies of body enhancement are unraveled.

Asides the popular botox injections, fat injections, and plastic surgeries, we have also seen gastric bypass and liposuction to reduce fats in concentrated parts of the body.

This perceived ‘madness’ has made Nigerians question why people will be willing to go under the knife to impress people on social media, and to also fascinate potential suitors.

A thorough research has been carried out and Ripples Nigeria has gathered various reasons why these celebrities, entertainers and socialites have decided to work on their physique surgically. Check it out below.

In 2018, controversial Nollywood actress, Tonto Dikeh revealed that she has found solace in herself for the first time after she went under the knife. In an Instagram post, the actress stated that she has never felt so happy and fulfilled in her entire life.

The actress also stated that she had always wanted to fix her body, however, she has continued to bury the thought until she finally went through with the surgery in 2018. Tonto Dikeh also took time to appreciate the surgeon who fixed her body.

“For the first time I took my time to appreciate my new body (Damn too s*xy by the way),I cried, I leaped with joy and all I can say is am so ready to conquer the world with my new found confidence…,” Tonto stated at the time.

It is important to note that men also take botox injections, and engage in surgical or medicinal procedures to increase the size of their private parts or do hair transplants or other riskier fashion procedures.

A prominent example is the English footballer, Wayne Rooney who did a hair transplant a couple of years ago. Also, Hollywood actor, Mickey Rourke has also undergone cosmetic surgery.

The purpose of cosmetic surgery is to also help boost one’s self-confidence and recapture youthfulness.

While some people are naturally confident in themselves, others have to struggle to accept who they are. In this day and age, the beauty standard is at a zenith where women, especially those in the entertainment industry are pressured to attain.
Women have gone through mammary glands, bum augmentation procedures to improve their curves while they also do face lift procedures, receive botox injections or get nose jobs or even change the diameter of their ears.

It is a dangerous business looking flabby in this day and age.

The entire essence of it is to help people change problematic areas of their bodies giving them problems or which they feel insecure about.

Not everything about cosmetic surgery is controversial or negative. Sometimes, it is the only option and life changer available to the person.

For instance, in the case of extreme necessity like for burn victims, body enhancements and surgical procedures can be necessary.

Of course, conversation shouldn’t only be about the negatives, but equally the positive aspects.

Surgery is perceived with incredible negativity amongst the conservatives of the world, which represents a significant number of existent people.

The most notable person who had to undergo compulsory reconstructive surgery is the Sosoliso airplane crash survivor, Kechi Okwuchi.

She is one of the two survivors of the horrific plane crash which occurred on December 10, 2005.

Here is what the former America Got Talents’ contestant had to say about her surgery in 2019;

“I had surgery this past Tuesday guys, so I’ve been off the grid for a bit☺️ I had a full thickness skin graft, which is basically cutting viable skin from one part of the body and pasting it elsewhere, in this case, my neck.

The goal is to release tension caused by heavy scarring in my neck ..anyway! Day 3 post op and I’m feeling stronger already so I thank God!”

Finally, there are individuals who simply want to fix their bodies just so they can trend on Twitter and make waves on Instagram. There is nothing wrong with them; they have no deficiencies or insecurities, they simply want to be recognized and appreciated for their beauty.

These celebrities state that they are doing it for themselves and their potential suitors. A typical example is the controversial socialite and crossdresser, Bobrisky who has continued to cast headlines due to his maverick nature.

Nigerian media personality, Toke Makinwa stated a couple of years ago that she had her plastic surgery because life is short and she simply wanted to look good in clothes.

“If you want to get your body done.

Do it, life is too short and just make sure it is what you want and not what you think is expected of you.

No one is perfect and you’ll still need lots of exercising to keep fit.

Surgery is half of it, any surgeon will tell you.”

Despite the conservative nature of the average Nigerian, it is safe to say more people will be going under the knife despite the surgery not being remotely cheap.

It is what it is, people have the fundamental rights to create whatever they choose to of themselves.