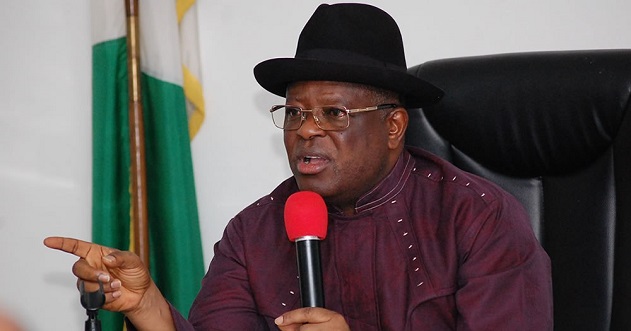 Ebonyi State Governor, Dave Umahi has blamed the opposition Peoples Democratic Party (PDP), an unnamed Senator in the state as well as some officers of the Nigeria Police of carrying out shootings in the state in the name of the proscribed Indigenous People of Biafra (IPOB).

Umahi who made the allegations on Sunday at a church service at Government House Chapel in Abakiliki, the state capital, said the shooting along the Enugu-Abakaliki express road while President Muhammadu Buhari was on a state visit, said the shootings were not carried out by IPOB or its militia wing, the Eastern Security Network (ESN), but orchestrated by the PDP and the Senator using the police.

“There was a report of shooting along the Enugu-Abakaliki express road when President Muhammadu Buhari was in the state; the shooting was done by the PDP people; the shooting at the Secretariat was also carried out by the PDP and a sitting Senator in this state and for the past two weeks, they have been shooting in that area, is that how they want to contest and win elections in Ebonyi State?

“There were even questions as to why there was no announcement of IPOB about the President’s coming; the answer is I don’t know, refer the matter to God, everything worked out perfectly well and that could only come through fasting and prayers.”

Umahi also claimed that the gunmen who attacked a police station in Ezza South and North were caught with weapons belonging to the police and a vehicle carrying a Senator’s name and PDP logo.

“When the police stations were attacked in Ezza South and North, the police guns were missing, when the shooting was happening and one of the thugs were arrested, with a bus of a Senator painted in PDP colour, with his name boldly written on it, do you know what was discovered, among other guns and ammunition was the police gun.

“How can you come to a state and you will be shooting as if there is no government, and you are carrying police people and then your thugs are shooting, it won’t happen again”, the APC presidential aspirant said.