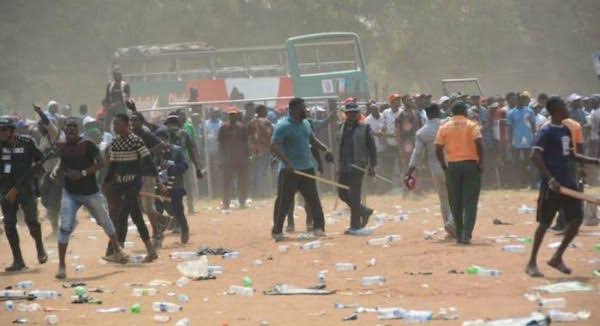 The Imo State chapter of the All Progressives Congress (APC) has said that it knew nothing about the attempt by suspended chairmen and councillors to take over the 27 council areas in the state.

But in a statement on Tuesday, the state APC dissociated itself from the act and said it was not sure the suspended council officials were members of the party.

The suspended chairmen and councillors came into office during the government of former Governor Rochas Okorocha.

They were suspended when Governor Emeka Ihedioha of the Peoples Democratic Party (PDP) took over the leadership of the state.

However, the suspended officials, relying on the Supreme Court judgment delivered in the suit between the Ekiti State Governor and the council chairmen, Monday invaded the councils in Imo State.

The development resulted in the death of one person in Isu LGA. Several other persons were also wounded in other parts of the state.

But stating its position on the matter on Tuesday, the state APC publicity secretary, Enyinna Onuegbu told newsmen that the APC had no hand in the invasion.

Noting that the matter between the suspended chairmen, councillors and the state government was still in court, Onuegbu said that the APC believed in rule of law and respect for court judgements.

He said there was no way the party could have endorsed anyone or group to resort to self-help in order to get justice.

Referring to the Ekiti case, he said, “The Ekiti State LGA court judgment is not applicable in Imo State until same is affirmed by the court sitting on that of the Imo State counterpart.”

Speaking further, he said, “APC and the president of the Federal Republic of Nigeria believe in the rule of law, APC is not part of the gang-up by some desperate politicians to take over the Imo State LGA administration by force.

”Imo State APC was never at any time informed, carried along or supported the event and the actions of the suspended LGA Chairmen. It is a total embarrassment to us the executive members of the party.

“No loss of life is worth any political agenda.”

Onuegbu called on the youth in the state to resist any attempt by desperate politicians to use them to cause unrest in the state.

Related Topics:APC on suspended chairmen invasion of LGA councils in ImoImo APC
Up Next

ICPC files case against President of Surveyors Council of Nigeria