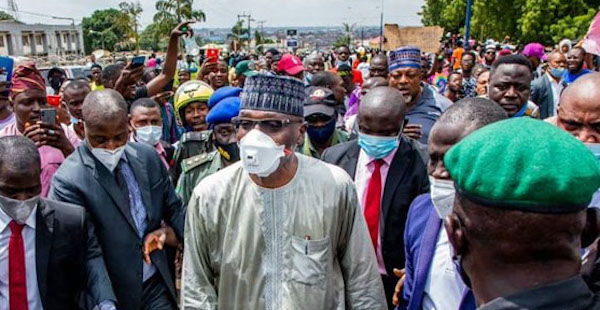 Kwara State Governor, AbdulRahman AbdulRazaq, on Thursday led hundreds of #ENDSARS protesters to the headquarters of the state police command in Ilorin, the state capital.

He urged the protesters to remain calm and peaceful while their grievances were promptly addressed by the Federal Government.

The governor, according to a statement issued by his Chief Press Secretary, Rafiu Ajakaiye, was accompanied on the trip to the police headquarters by his deputy, Kayode Alabi.

AbdulRazaq told the protesters that a few governors and some businessmen had recently held a meeting with some individuals involved in the protest against the brutality of the now disbanded Special Anti-Robbery Squad (SARS) and their five-point demands forwarded to President Muhammadu Buhari.

He added that the president was acting on the demands.

The governor said the state government had set up an ombudsman through which people can channel their grievances for prompt action.

AbdulRazaq said: “However you look at it, we are all victims. I have since joined the protest. Some of you may notice online that I joined a Zoom meeting on Monday with Hajia Aisha Yesufu, Aliko Dangote, Wizkid, and others to arrive at a resolution on this protest.

“It was part of this that led to the five-point agenda which is being implemented now by the federal government. The president is definitely listening to the complaints.

“The Commissioner of Police has listened to your complaints here. I have also listened. I thank you for your calmness.

“I urge you to please give Mr. President the time to implement the five-point agenda. A reform is definitely coming to address all the issues.”

The state’s Commissioner of Police, Kayode Egbetokun, who also addressed the protesters, commended them for being peaceful.