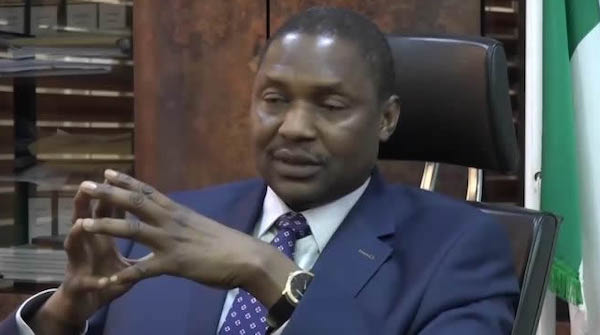 The Attorney-General of the Federation and Minister of Justice, Abubakar Malami, on Saturday denied the allegation that he bought a N300million mansion for his newly married son, Abdul Aziz, in Abuja.

In a statement issued by his media aide, Dr. Umar Gwandu, the AGF also described as preposterous, report by an online media platform that he hired private jets to fly dignitaries from across the country to Kano for the second leg of his son’s wedding held on Saturday.

The online platform had claimed that Malami son’s wedding was lavishly conducted in breach of COVID-19 guidelines.

It also alleged that guests danced and communicated close to one another without face masks and sprayed several United States dollars and naira notes on the newly married couple.

However, Malami had insisted that the wedding fatiha took place under strict observance of the protocols and guidelines of the Presidential Task Force on COVID-19.

He also described the allegations as the handiwork of “disgruntled elements.”

The statement read: “The attention of the Honourable Attorney-General of the Federation and Minister of Justice, Abubakar Malami, has been drawn to a mischievous, deceitful and perfidious publication by the notorious factory of fake news in Nigeria, the Sahara Reporters with an intent to spread lies.

“It is regrettable that the information communication technology tools have been hijacked by disgruntled elements in spreading fake news and blatant lies.

“The report by the media is a clear violation of ethical journalism practices on verification of facts and authentication of claims. It evinces lack of professionalism and exposes rash and reckless presentation of the figment of imaginations shrouded with bigotry and bundled with sentiments of unscrupulous questions.

“For instance, who is the vendor of the purported house bought for the son of the minister in Abuja at N300m? Where is the so-called mansion located in Abuja? Where are the title documents?.

“God knows that I did not purchase any house for him in Abuja. Not even a rented house was secured for my son in Abuja, because he has no plan to live in Abuja.

“The allegation of hiring private jets for the marriage was preposterous.

“It is common knowledge that the Attorney-General of the Federation and Minister of Justice had neither a father nor mother anywhere in Nigeria to be conveyed to Kano for the wedding.

“Who then is the Attorney-General using the chartered flight to convey? Which jets are chartered? Who paid for the charter? Through which means was the money paid?

“It is one of such libelous publications of which Sahara Reporters is commonly known for, targeted at selected few for unsubstantiated fabricated allegations while overlooking more serious reasonable allegations visibly open against its favoured sectional kinsmen.

Malami explained that he had earlier notified his friends and colleagues in writing that the wedding would be low-keyed due to the current COVID-19 pandemic in the country.

The statement added: “It is important to note that the wedding fatiha took place in Kano on Saturday 11th July 2020 in the morning.

“Any other activity before or after the wedding fatiha is not connected with the marriage and we, therefore, disassociate ourselves from it in its entirety.”