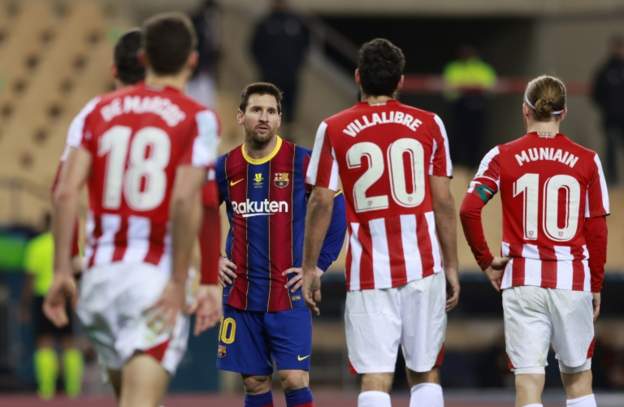 Lionel Messi was shown a red card in a thrilling Super Cup final that saw Barcelona lose to Athletic Bilbao after extra-time on Sunday.

Bilbao emerged as the new holders of the Super Cup as they defeated Barcelona 3-2, thanks to an extra-time winner.

Antoine Griezmann had put the Catalan giants ahead in the 40th minute before Bilbao fought back two minutes after through Óscar de Marcos.

Griezmann put Barca ahead again in the 77th minute and they were cruising to victory before a 90th-minute equaliser by Asier Villalibre sent the game to extra time.

The late goal appeared to have dampened Barca’s spirits as Bilbao pressed on and successfully picked a winner in the 94rd minutes through Iñaki Williams.

Barca ended the game with 10 men after Messi swung a fist at an Athletic player, as frustration mounted up for the Argentine’s team.

The red card was Messi’s first-ever as a Barcelona player. The 33-year-old has had 753 appearances for the club.

The Spanish Super Cup is in its second year as a four-team tournament, contested by the top two teams in the La Liga alongside the two finalists of the Copa del Rey.

Barca were taken to penalties by Real Sociedad in the semi final, while defending champions Real Madrid were beaten by eventual winners, Athletic Bilbao.