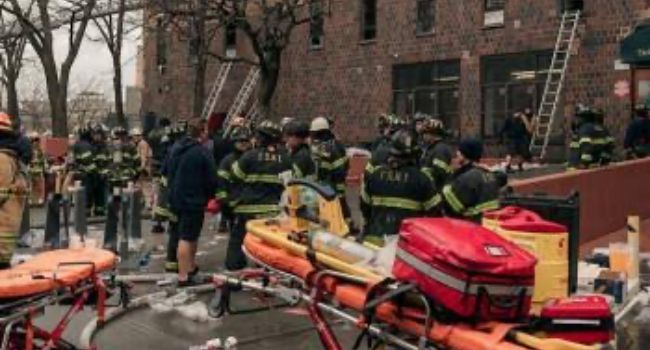 A massive fire that engulfed a residential apartment building in the Bronx in New York City on Sunday, left 19 people, including 9 children, dead, according to the city’s Mayor, Eric Adams.

He described the incident as “one of the worst fires the city had experienced in modern times.

“This is a horrific, horrific, painful moment for the city of New York, and the impact of this fire is going to really bring a level of just pain and despair in our city,” Adams said.

“This is going to be one of the worst fires that we have witnessed during modern times here in the city of New York,” Adams said.

“I am horrified by the devastating fire in the Bronx today,” New York Gov. Kathy Hochul said on Twitter. “My heart is with the loved ones of all those we’ve tragically lost, all of those impacted and with our heroic FDNY firefighters. The entire State of New York stands with New York City,” he added.

In a press conference shortly after the fire, Nigro attributed the inferno to a “malfunctioning electric space heater”.

He said the heater was in the bedroom of an apartment, and the fire consumed the room, before engulfing the entire apartment.

“The apartment door was left open and smoke spread throughout the building when the residents left their unit,” Nigro said.

“Victims were found in stairways on every floor of the building, many in cardiac arrest. This could be an unprecedented loss of life. The injuries were predominantly from smoke inhalation.

“Firefighters kept attempting to save people from the building despite running out of air tank. Some of the residents who were trying to leave the building could not escape because of the volume of smoke.”

The residential apartment where the fire occurred is 50 years old and has 120 units, and housed a largely Muslim population, with many immigrants from West African country, the Gambia.

Preacher sentenced to death for blasphemy in Pakistan