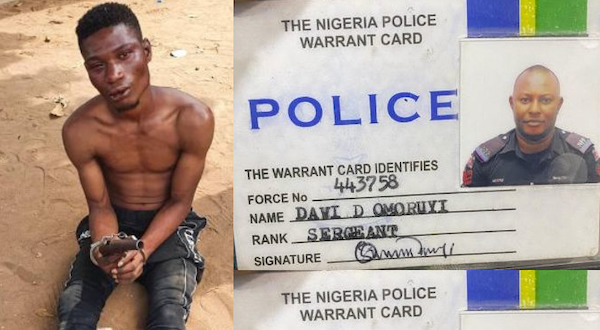 The Lagos State police command on Sunday confirmed the arrest of a suspected member of an armed robbery gang terrorizing Point of Sale (POS) operators in Ipaja and neighbouring communities in the state.

The command’s spokesman, Olumuyiwa Adejobi, who disclosed this in a statement in Lagos, said the suspect, Korede Anifowose, was arrested by operatives of the police Anti-Crime Squad after members of his gang stormed a POS stand at Fatolu bus-stop in Ipaja at the weekend and attempted to dispossess one Sola Musa of cash and other valuables.

According to him, one locally-made pistol and some expended cartridges were recovered from the suspect.

He added that police operatives in the state also arrested a fake police sergeant with 30 kilogram of Indian hemp at Alaba Rago Market in the Ojo area of the state.

The suspect, David Omoruyi, was accosted by policemen attached to Area “E” in the Festac area of the state and introduced himself as a police sergeant.

Adejobi said: The command decided to beam its searchlight on attackers of POS operators based on complaints we received on the antics of the criminals who terrorise POS operators and those dealing or transacting with liquid cash in the state.

“The Commissioner of Police, Lagos State, Hakeem Odumosu, has mandated Divisional Police Officers to beef up security around those dealing with liquid cash in their businesses, as the command cannot afford to leave them or anyone in the state unprotected.

“David Omoruyi on his own claimed he was a serving Sergeant attached to Mopol 49, Epe, Lagos State. But after due interrogation and investigation, he confessed to being a fake policeman. He confessed that he used to flash the fake Identity card to gain access and for easy passage of their loot or drugs whenever they were on business.

“The Commission of Police has directed that the suspects be transferred to the State Criminal Investigation Department (SCID), Yaba, for discreet Investigation, while their fleeing members be searched for and brought to book with immediate effect.

“The CP also admonished the general public to always avail useful information to the police in order to discharge their duties diligently as expected.”

‘Silence on Nigeria’s crises because of 2023 dangerous,’ Saraki cautions politicians