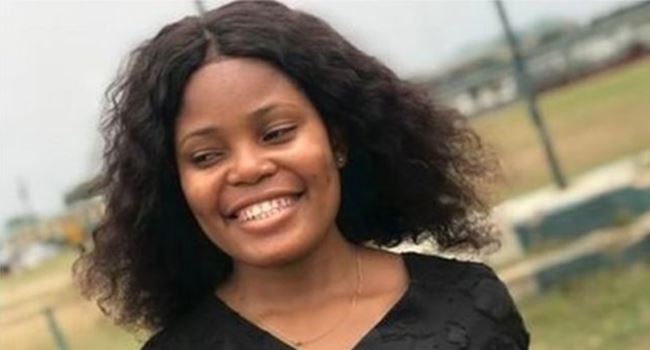 The Akwa Ibom State Police Command has come out to clear the air on the celebrated murder of a 26-year-old job seeker, Iniubong Umoren, who was allegedly murdered by one Uduak Frank Akpan, insisting that insinuations that the case had been transferred to the Department of State Service (DSS) were false.

In a media chat on Monday in Uyo, monitored by Ripples Nigeria, the state Police Public Relations Officer (PPRO) SP Odiko Macdon, said the case file was at the Directorate of Public Prosecution (DPP) and not with the DSS, while the suspect was being remanded in the State Correctional Centre at Ikot Ekpene.

Macdon added that it would be “sheer folly for the police to hands-off the case after going through the hurdles of arresting the suspect under 24hours of allegedly committing the crime, exhuming the victim’s corpse and subjecting the same for autopsy.”

The police spokesman added that the Command had enough evidence to prosecute Akpan and wondered why some people would assume that the police had backed out of the case due to pressure from top politicians in the state.

“It is only the police that are empowered by law to handle such cases, and we can’t abdicate our responsibilities.

“What we have now is enough to prosecute and secure conviction; only the police are empowered by law to handle such cases. So why should we transfer the case to DSS?

“I read that we have handed over the case to DSS, no! The Police cannot handover a case file to DSS for prosecution, it is not possible. Police is the lead agency in internal security.

“The main thing is that we apprehended the suspect. He was remanded in prison alongside other suspects. We have transferred the case file to DPP and we are waiting for advice.

“Autopsy on the corpse of Iniubong Umoren has been conducted, the result is out, we now have what it takes to nail Frank. It was very painful for people to say the police didn’t do a nice job.

“There are some cases that when it happens, they must still be sent down to the police for prosecution. It is only the police that can enforce any law in this country. Some specialized agencies cannot enforce any law that does not fall within their purview.

“We worked with the DPP to get those people remanded in the Nigeria Correctional Service even before the court resumed. They will be arraigned, we have sent the case files of Uduak Frank, the Soldier who murdered one Enobong Jimmy, and the Church Founder, Ukachukwu Christopher who beat his wife to death to DPP, and we are waiting for them.

“Let me assure you that the Command will leave no stone unturned in ensuring that all those cases are prosecuted logically because we have carried out the autopsies and have the result.

“We have the suspects in custody, we have the legal teams ready, and we have a robust relationship with the justice department because we are all ministers in the temple of justice.”