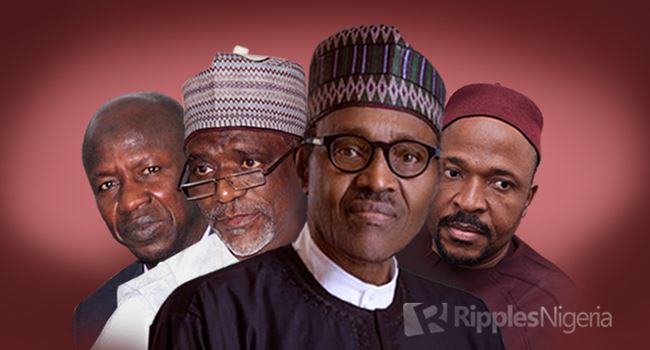 Welcome to Quick Read. The arrest and suspension of Ibrahim Magu, Acting Chairman of the Economic and Financial Crimes Commission (EFCC); political mudslinging in Edo, among others, occupied a prominent place in political developments last week.

While you relish these and other stories, their implications for Nigeria’s political journey can’t be ignored. Enjoy!

On Monday, July 6, 2020, Magu, the EFCC boss was ambushed and made to appear before an administrative panel probing allegations of corruption in the agency.

Amid earlier denials of his arrest by the anti-graft agency, it turned out at last that the hunter had, indeed, become the hunted over allegations of corruptions, the same offence he was appointed to fight.

Why Magu’s travails matter: The manner in which Magu was ambushed and arrested clearly shows the desperation to oust him from office, which had long been the game plan of some forces within the presidency.

Also, it puts to rest any doubts of in-fighting between and among key members of President Muhammadu Buhari’s team. In this particular instance, the Minister of Justice and Attorney-General of the Federation(AGF), Abubakar Malami, beside many other excuses, wants Nigerians to believe that Magu is disrespectful to his person and office.

Many critics also think that the incident could be an indicator to the fact that the rule of law might play a limited role in the orchestrated plan to oust of Magu.

The Federal Government on Wednesday, July 8 suspended the planned resumption of federal schools across the country, a report that got many Nigerians, including the House of Representatives, kicking.

The Minister of Education, Adamu Adamu, released the bombshell while speaking to State House Correspondents at the end of the Federal Executive Council (FEC) meeting at the Presidential Villa, Abuja. He added that the federal government had also stopped students from participating in the West African Senior School Certificate Examinations (WASSCE) earlier slated for August 4 to September 5.

Why it matters: The suspension may have shed light on the seeming lack of coordination within the Education Ministry. Beyond the COVID-19 pandemic, Adamu’s disposition has raised questions as to why he put the Minister of State for Education Emeka Nwajiuba to public ridicule. If not politics, what else?

Being regularly absent form the regular Presidential Task Force (PTF) on COVID-19 briefings, it is impossible to admit his claim that Nwajiuba was misquoted on the matter of schools resumption.

If there were no politics in the suspension drama, why then have all the commissioners of education in the 19 northern states suddenly called for support for Adamu Adamu.

READ MORE: No WAEC exams for students in Nigeria as FG suspends planned resumption of schools

The Governor of Kano State, Abdullahi Ganduje on July 7 made the headlines when he jokingly said that his counterpart in Port-Harcourt, Governor Nyesom Wike of the Peoples Democratic Party (PDP) would be placed in isolation centre while the All Progressives Congress (APC) rides to victory in the forthcoming Edo State governorship election.

In a rather brutal response, Wike said, “We shall ‘chop’ Ganduje’s dollars and we will ‘chop’ him into a coma”.

Why it matters: The comments are early suggestions that the two major political parties might not be prepared for campaigns built on issues that really matter. Even though considered as jokes, they appear to be in bad taste and insensitive to the pains the world is going through in a time of health crisis.

READ ALSO: EDO: “We shall ‘chop’ Ganduje’s dollars and we will ‘chop’ him into a coma” —Wike

The Minister of Science and Technology, Dr. Ogbonnaya Onu on Thursday, July 9, said RNA-Swift, a test kit for the identification of SARS-CoV-2, the causative agent for COVID-19 has been developed and validated in the country.

The minister, who spoke at a press conference in Abuja, said the move was to accelerate the capacity to test people and help effectively manage the coronavirus pandemic.

Why it matters: The scientific feat is certainly a plus for the country’s sagging image. With the Nigeria Centre for Disease Control (NCDC) insistence that it recognizes and can only trust Reverse Transcriptase Polymerase Chain Reaction (RT-PCR), also known as nucleic Acid Ampli­cation tests, the question then remains, will the NCDC accept the RNA-Swift test developed by Nigeria?

Until and when this solution is put to use, the announcement would amount to nothing but grandstanding.

After days of seeming inaction, President Muhammadu Buhari on Friday, July 10, finally broke his silence on Magu’s saga. In a statement issued by Umar Gwandu, the spokesman for the Attorney-General of the Federation, Abubakar Malami (SAN), Buhari, officially announced Magu’s suspension as the EFCC chief and the appointment of Mohammed Umar to act in his stead.

Why it matters: The official approval of Magu’s suspension by Buhari, who refused on two occasions to heed the advice by the 8th Senate to sack Magu, could mean Magu’s fate as the EFCC boss might have been sealed, regardless of the outcome of his probe by a presidential panel headed by a former president of the Court of Appeal, Justice Ayo Salami.

Buhari’s move also raises questions on whether the position of chairman of the anti-graft agency has been completely ceded to the northern part of the country.

Some unknown persons on the morning of Friday, July 10, allegedly broke into the new office of the Nigerian Financial Intelligence Unit (NFIU) and destroyed computers containing certain vital and sensitive documents that could help in the ongoing investigation of the Magu.

The move is suspected to be an attempt by some operatives of the EFCC to cover up facts about the commission’s operations following the arrest and detention of its suspended chairman.

Why it matters: The alleged Friday burgling of NFIU, while some officials of EFCC were undergoing interrogations at the presidential investigative panel, might suggest a desperate move at a grand cover up.

The development, contrived or not, may complicate Magu’s travails and put a final seal on his quest to extricate himself from allegations bordering on abuse of office.