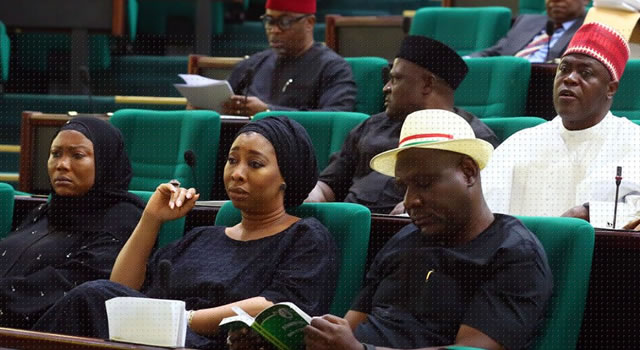 The Wednesday session of the House of Representatives presided over by Speaker Yakubu Dogara witnessed commotion of a sort after a lawmaker identified himself as a member of Reformed All Progressives Congress (R-APC).

The scene at the plenary of the House on Wednesday was peaceful until Speaker Dogara yielded the floor to Bode Ayorinde (Ondo State) to make his contribution to an ongoing debate on a motion by Ossy Prestige from Abia State.

The debate was that the House should prevail on the Federal Government to conduct a national census by next year.

Ayorinde having the floor, introduced himself as a member of R-APC.

The mention of R-APC apparently stung lawmakers of the All Progressives Congress (APC), who in their numbers tried to shout down Ayorinde.

EJ Agbonaima from Edo State, who clearly appeared to have been worst hit by the mention of R-APC, retorted with “There is no faction in APC”.

There was mild drama as R-APC lawmakers and their colleagues in APC shouted at each other with lawmakers of the Peoples Democratic Party (PDP) applauding and smiling in admiration.

This temporarily calmed the situation and Ayorinde made his contribution.

The shouting match however resumed again after the Speaker called on Tope Olayanu from Kwara State to second a motion.

Clearing his throat as he stood up, Tope with a loud voice said, “Mr. Speaker, I am a bonafide member of R-APC”.

It was as if hell was let loose as angry APC members from their different sitting positions began to uncontrollably shout “sit down”, “sit down”.

Again, the Speaker calming the situation, said, “Hon. Olayanu, I called you to second the motion, not to announce the party you are in”.

R-APC was recently formed by members believed to be aggrieved new PDP bloc of the APC as a faction of the ruling party.

R-APC chairman, Buba Galadima, was among leaders of the said 38 political parties that signed a Memorandum of Understanding (MoU) with the PDP to form the Coalition of United Political Parties (CUPP).

Fayose appears in neck-brace, narrates ordeal in hands of police