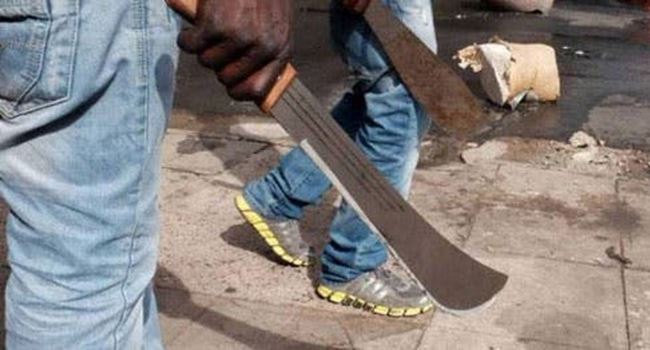 Protesting residents of Owube community, Ahoada West Local Government Area, Rivers State, marched in their numbers to Government House in Port Harcourt on Tuesday to complain about the criminal activities of the cultists in their community.

Many of the protesters, especially the elderly, who looked traumatized by the attacks carried placards, complaining that the cultists in their reign of terror barred them from going to their farms.

Speaking on behalf of the protesters, Mrs. Florence Eric said that the cultists who have been killing, maiming and raping residents were demanding an undisclosed amount of money as settlement to let peace reign in their community.

Mrs Eric who claimed that they could hardly sleep in their houses following regular operations of the cultists called on Governor of the state, Nyesom Wike and the Commissioner of Police to save them from rape and brutality.

She said; “Cult boys in our community do not allow us to go to our farms again. At night they come and cause trouble. We do not sleep again. We don’t have rest.

“They kidnap at will. We cannot go out to look for food. We need help to survive this challenge. We want the government to help us in any way they can. These cultists are within our community. It is cult boys within our community joining hands with their friends from outside that are behind this. They barred us from going too far again.

“They said we should come and settle them and we don’t know how to settle them. They said they need money from the community but they didn’t mention how much they need,” she noted.

One of the protesters, Mr. Franco Confidence said they besieged the Government House to submit a petition to the governor and the police on the need to urgently come to their aid.

He said: “We came to submit a petition to the governor over the incessant killings in our community. For over five years now we haven’t slept in the community. People now sleep in the bushes.

“We have done all we can to restore peace in our community, but it has not yielded any positive result. We have submitted a petition to the out gone Commissioner of Police in the state and the Ahoada West Local Government chairman but nothing changed.

“We still have a high level of insecurity. We brought OSPAC, who come at night, but now these boys come in the afternoon to kidnap and rape women.

“We want the governor to come to our aid. We are tired of sleeping in the bush. If they will give us a police post we will like it. This upsurge started in 2016 and we have lost over 20 people and many have been kidnapped. Like my uncle has been kidnapped twice and we paid ransom.”

Related Topics:cultistsrivers state
Up Next