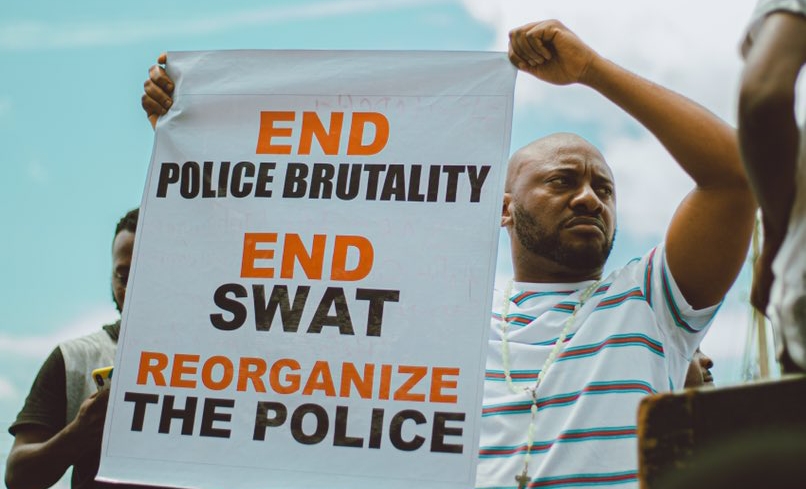 It has been eight days since #EndSARS protesters have continued to swell the momentum of their agitations against police brutality, both online and on the streets.

Thursday was no exception, as hashtags and phrases that made their way to the trends table were all affiliated to the struggle. Here are a few hot trends that kept the conversation going on social media:

It was an interesting turn of events on Twitter early Thursday as international Hacktivist group also known as Anonymous, lent their voices to the #EndSARS protest.

The group was said to have allegedly hacked the Nigerian government data base, releasing account information of defunct SARS operatives, and threatening to make more shocking revelations about the presidency if protesters are not appeased within 72hours.

Anonymous now is when we need you. To expose every secret about our countries governance and leak it to the world. We have been suffering for many generations. It has to end now. With you we know it would. @YourAnonNews #Anonymous

Musiliu Akinsanya, leader of the National Union of Road Transport Workers (NURTW) also known as MC Oluomo, hit the trends table alongside ‘Lagos’ and ‘#AlausaProtest’ in midday on Thursday.

Lagosians called the socialite out for allegedly mobilizing armed thugs to disrupt the protests around the Alausa axis of the state. MC Oluoma has however denied any involvement.

Tweeps also called out the governor of Lagos State, Babajide Sanwo-Olu for releasing the state’s bus that conveyed the thugs in their numbers. But the Governor has since denied knowledge of this.

Thier plan:
Get d protest hijacked by touts
Tell the world we are becoming violent and it’s no longer safe to be on the street
Declare a state of Emergency
Bring out the military to take us off the street.
Hey, we are learned as well, smarter, more intelligent. We mutate peeps

If there I still any shred of humanity in us in Lagos state after the “show or shame “ and state sponsored terrorism. This should be the last APC government in Lagos state

No be me send thugs go disrupt #EndSARS protest for Ikeja — MC Oluomopic.twitter.com/b67AQPrHVj

Read Also: Obiano assures #EndSARS protesters of release of all ‘illegal’ detainees in SARS cells in the state

With over a hundred thousand tweets, the National Youth Service Corps (NYSC) trended after the Federal Government set November 10th as the date for reopening of orientation camps nationwide.

The Academic Staff Union of Universities (ASUU) also trended alongside after reports flooded in that the Union’s meeting with the Government is making headway, meaning the ongoing strike could be called off soon.

It is believed that #EndSARS protesters, especially those on the streets, are mostly students and prospective corps members. Hence the moves by government have been interpreted as a strategy to bring to an end the protests.

What do u expect from people whose children study abroad ?

From the morning of Thursday, #EndSARS protesters have been calling out Nigerian lawmakers after a breakdown of their salary structure showed they received “Newspaper” and “Hardship” allowances.

Nigerian Twitter users considered it outrageous, especially when compared to the renumeration of the Police, and have taken to the social platform to demand explainations.

Thank you. But first, you guys will explain to us what hardship and newspaper allowance is

I wish these same police will have sense and see that this fight also concerns them but no…those 50 naira has blocked their remaining sense.😒#EndSWATNow

Let him mislead us…. Atleast you leaders have lead us to where we are now.. Let's see the bad road any youth will lead us too.
We are tired !!!!
Live with love from Ivory-coast,🇨🇮#EndSWAT #EndSARS #EndBadGovernanceinNIGERIA #EndPoliceBrutalityinNigeria @DrOlufunmilayo

The security committee of the FCTA accused protesters of violating Covid-19 protocols as well as endangering their lives.

But the Twitter community reminded them of Government’s silence in spite of the crowd that gathered during the burial of Late Chief of Staff to President Muhammadu Buhari, Abba Kyari, and also during the political campaigns in Edo and Ondo.

The same people who attended Abba Kyari's burial without masks want to ban protests due to violation of Covid19 guidelines? pic.twitter.com/lK3Obftoog

All of a sudden rules are being violated. Where was the rules during Abba kyari's burial?
Or during Buhari's daughter wedding?
Or during Edo state election rally?
Or even the recent naija @60 party?