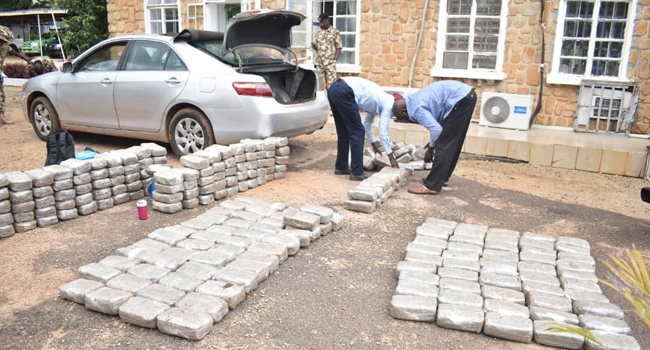 Troops of Operation Safe Haven (OPSH) in Plateau State on Tuesday cracked down on a drug syndicate and recovered 248 blocks of substance suspected to be cannabis worth N7.5 million.

The OPHS Information Officer, Major Ishaku Takwa, who disclosed this in a statement on Wednesday, said the suspects concealed the substance in a Toyota Camry car with Lagos registration number KJA 150 EG.

He added that a 60-year-old ex-soldier, Cpl. Essien Friday, and a 50-year-old Ibrahim Ali were arrested by the troops during stop and search operations along the Manchok road in Kaura local government area of Kaduna State.

According to the spokesman, the suspects claimed they were contracted to convey the substance from Ondo State to Yola in Adamawa.

Other items recovered from the suspects include 18 wraps of Indian hemp, two smartphones, three travelling bags, one lighter and two wallets containing N570 only.

Takwa said the suspects and items had been handed over to the National Drug Law Enforcement Agency (NDLEA) for further investigation.