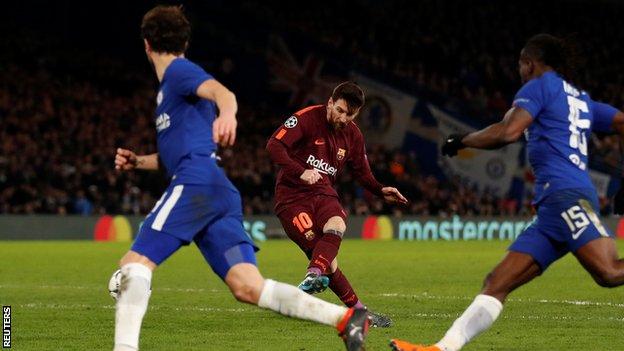 Super Eagles forward, Victor Moses was in action as Chelsea blew away a hard-earned one-goal lead in their Champions League last16 encounter with Barcelona at Stamford Bridge on Tuesday night.

The recently-crowned Nigeria Football Federation (NFF) Player of the Year was busy throughout the game as Chelsea played mostly defensive, but could not help his side win the game.

After a goalless first half, Willian, who had twice hit the woodwork, put the hosts ahead with a low strike from outside the penalty area on 62 minutes.

However, the Blues were only ahead for 13 minutes before Andreas Christensen played a loose pass and Andres Iniesta linked up with Lionel Messi who slotted in the equalizer.

The La Liga leaders are thus going into the second leg of the tie with the benefit of an away goal, and will be favourites to advance when they play at Nou Camp on Wednesday, March 14.

The Turkish side had Domagoj Vida sent off in the 16th minute, as the hosts capitalised on the advantage to seal their 14th consecutive victory– which equals their longest winning run.

Besiktas will need to score 6 unreplied goals in the second leg of the tie to qualify for the quarterfinals of the competition.