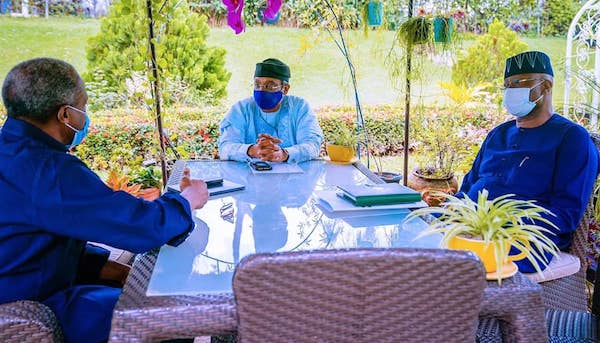 The Speaker of the House of Representatives, Femi Gbajabiamila, on Sunday, met with Vice President Yemi Osinbajo, over the planned mass action by the organized labour.

The meeting was also attended by the Secretary to the Government of the Federation, Boss Mustapha.

It took place at the official residence of the vice president in the Presidential Villa, Abuja, a few minutes after the speaker had met with labour leaders at the National Assembly complex.

However, the meeting ended in deadlock.

Gbajabiamila, who confirmed the meeting on his Twitter handle, expressed optimism that the industrial action will be averted.

READ ALSO: STRIKE: No going back, Labour says after meeting with Gbajabiamila

He wrote: “After my meeting with labour I met with the VP and SGF.

“We had fruitful discussions and I am hopeful tomorrow’s strike will be averted.”

The Nigeria Labour Congress (NLC) and Trade Union Congress (TUC) had earlier on Sunday declared the readiness to go ahead with the September 28 nationwide strike over the recent increase in the price of petrol and electricity tariff.