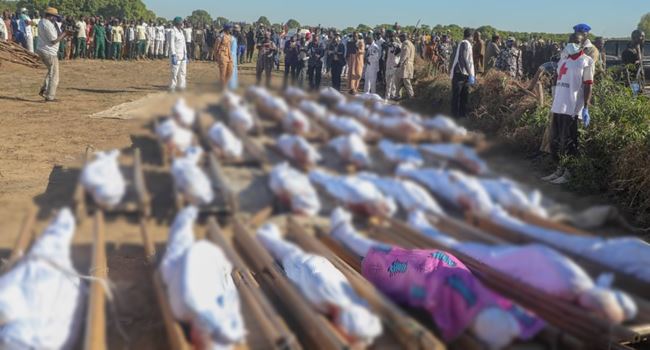 The Coalition in Defence of Nigerian Democracy and Constitution (CDNDC) has demanded the immediate sack of the Service Chiefs and Heads of Department of State Security and Nigeria Police Force over the beheading of 43 rice farmers in Borno State by Boko Haram insurgents.

This was contained in a statement signed and issued by the Convener, CDNDC, Ariyo-Dare Atoye, who called on the Federal Government to immediately put a stop to the ongoing deradicalisation programme and halt the freeing of the so-called repentant Boko Haram members and prosecute them for their actions.

The CDNDC in the statement held that the people of this country are pained and have totally lost confidence in the service chiefs, and by extension in the government of President Muhammadu Buhari.

The statement by the group reads thus; “At this point, Nigerians must unite and be resolute in sounding the plain truth to Gen. Muhammadu Buhari that he should either with immediate effect sack the service chiefs, heads of the DSS, Police and overhaul the entire security architecture of the country or tender his resignation letter.

“Also, the government must immediately put a stop to its terribly flawed deradicalisation programme and halt the freeing of the so-called repentant Boko Haram, and ensure that these criminals and vampires are prosecuted and jailed.”

However, the statement called for a protest in the North East region over killings, attacks, displacements, and misery across communities despite security presence.

“This is also an appeal to our brothers and sisters in the North to end the indulgence and organise protests and rallies to demonstrate their frustration and disappointment in the regime and we are very ready to support them to advance this cause.”

The statement also added that “Let no one be deceived, this is a leadership problem and since Buhari has irredeemably failed to provide the leadership that he promised the people of Nigeria when he was campaigning, the National Assembly should be courageous enough to set conditions for impeachment – act, sack the service chiefs or be impeached.”