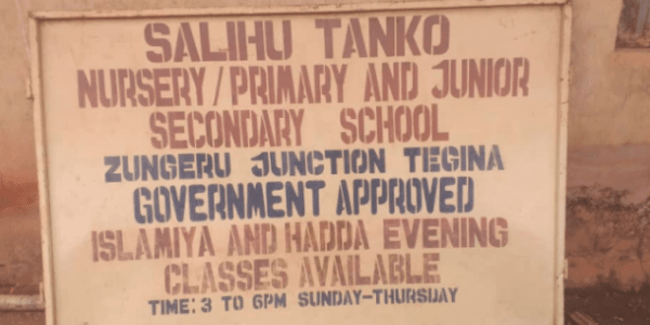 The Headmaster of Salihu Tanko Islamic School in Niger State, Abubakar Alhassan, said on Monday 15 teachers abducted from the school last month have escaped from captivity.

Alhassan, according to a statement issued by the Chief Press Secretary to the Governor, Mary Noel-Berje, stated this when Governor Abubakar Bello met with parents of the abducted students of the school at the palace of the Emir of Kagara, Ahmed Gunna.

Bandits had on May 30 abducted 156 students and teachers from the school located in Tegina town in Rafi local government area of the state.

They had since demanded N110million ransom for the release of the children.

The escaped teachers, according to Alhassan are currently in a military facility in Birnin Gwari, Kaduna State.

He urged parents of the abducted students to exercise patience as the government was exploring all avenues to ensure the students’ rescue.

The governor decried the spate of kidnapping and insecurity in the state.

He said: “We will give you all the necessary support to enable you to implement all your security strategies to ensure the safe return of our abducted children and others, if any.

“We have tried our possible best not to make them succeed in forcing us to change our normal lives; they started by displacing farmers from their farmlands, next they moved to burn farms.”

Related Topics:BanditsNiger Islamiyya school
Up Next