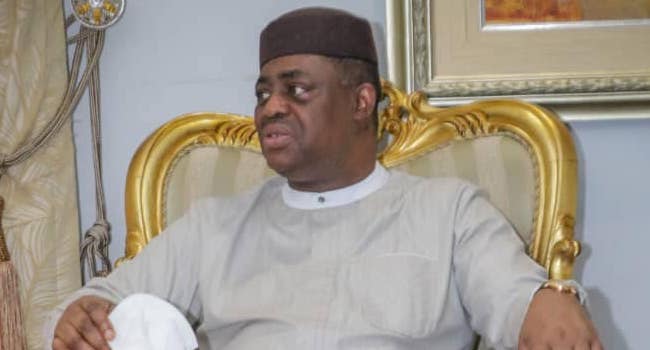 The Northern Elders’ Forum (NEF) has kicked against the inclusion of former Minister of Aviation, Femi Fani-Kayode, in the recent peace meeting and negotiations that led to the suspension of a nationwide strike embarked upon by members of the Amalgamated Union of Foodstuff and Cattle Dealers of Nigeria (AUFCDN).

In statement issued on Friday by its Director of Publicity and Advocacy, Dr. Hakeem Baba-Ahmed on Friday, NEF said though it welcomed the decision of the Federal Government to address a major and prolonged grievance of transporters over multiple taxation and extortion and the decision of the union’s members to suspend their strike, it is not pleased with the involvement of a private citizen in the meeting.

The Forum also rejected in totality the government’s idea of delegating its responsibility to private individuals and a man whose “flippancy and arrogance are legendary.”

Although the statement did not specifically mention Fani-Kayode’s name, many had seen the private individual in question as the ex-minister who the northern elders believe is supporting threats to the security of northern communities in the South-West.

“The Forum is disturbed by the visible involvement of a private citizen identified as supporting threats to the security of northern communities in the South-West in the discussions preceding the resolution of the strike, and the mention of a number of people who had been instrumental in creating intense hostility around northerners living in the South-West.

“Indeed, some of the persons mentioned as having been contacted to give assurances to northern traders, herders, and transporters, have been fingered by the police as being involved in criminal activities against northerners in the South-West.

“The Forum would rather believe that the involvement of these people was contrived to render its purported intervention valueless.

“In any case, the involvement of private citizens who represent existential threats to citizens in an exercise designed to give them assurances that they could be safe is abhorrent and unacceptable.

“The Forum recognizes the pivotal role of governors in the South-West as well as other respected leaders of communities, working with the Federal Government to improve the sense of security of all communities.

“Governors, in particular, are leaders with constitutional responsibilities to protect all citizens, and the Forum calls upon them to exercise those responsibilities fairly and diligently.”

Fani-Kayode had on Wednesday alongside the Governor of Kogi State, Yahaya Bello, attended a reconciliatory meeting at the Kogi Governor’s lodge in Abuja where the leadership of food and cattle dealers agreed to resume movement of food items from the northern to the southern part of the country.

Fani-Kayode, who addressed journalists after the meeting, appealed to the federal government to address the menace of Fulani herdsmen in the forests.