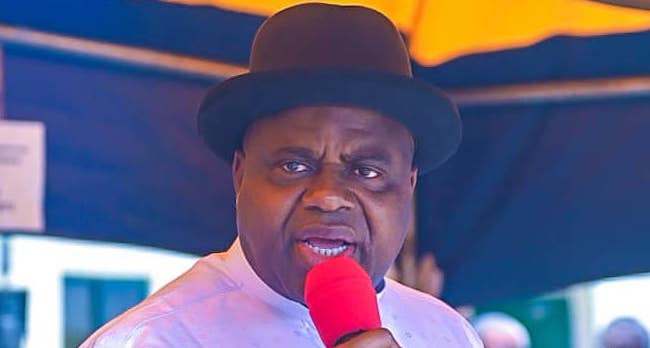 Penultimate week, the Bayelsa State Governor, Douye Diri, was in the news internationally for some scandalous sexual reasons. A top South African lawmaker, Zanele Sifuba, the Speaker of South Africa’s African National Congress (ANC) Free State legislature, had accused him of being behind the release of her nude video online! The SA politician never minced words in naming her nemesis pointing accusing fingers toward his direction. She confessed that they were lovers! An executive Governor of a flood-ravaged oil-rich state in Nigeria dating a political amazon in Mandela-land? Wonders shall never end in politics Nigeriana!

According to her: “This is the picture of the man who leaked our video. He is my lover whom I trusted. A Nigerian Official, by name Douye Diri” she said, posting the picture of the governor alongside and continued: “I trusted him with my life, but he betrayed me. Please share for the whole world to know the kind of man he is.”

But the revelation following the uploading of her nude video online cannot be said to be surprising to many Nigerians at home and abroad. Our politicians are ‘swimming’ in petro-Dollars so they can do whatever they want with impunity. In Nigeria money is almost everything! Forget about the God syndrome in our national life. Money, for the majority of our compatriots, is more important and more valuable than God!

Now the crucial questions: where did Gov. Diri date Ms Sifuba? In London, Yenagoa, Johanesbourg or Cape Town? Who leaked her sex tape? The venue of their amorous outings may not be important here. Yet, it goes to tell how flippant and wasteful our politicians could be with state resources entrusted in their hands.

Again, has the sexual relationship between Gov. Diri and Ms Sifuba waned or was she jilted? Are they still on good terms? Or their sexual relationship has soured? What possibly led to the exposure of the woman’s grey private parts in public online? Or were politicians in SA behind it all? Are Nigerians based in South Africa involved in the criminal endeavour? Accusing fingers are being pointed to a Nigerian con-artist trying to extort money from lawmaker Sifuba and when she failed to shell out the imposed fees the criminal decided to act.

Bayelsa has had Governors worse than the incumbent. Remember the big ‘Alams’? The late Diepreye Alameiseigha as Governor was ‘busy’ looting as much as possible while the gubernatorial party lasted. Niger Delta region has had Governors who loot and engage in sophisticated prolixity. If you want to learn a new thing or two on prose or grammar then get in touch with Governor Ben Ayade of Cross Rivers State! If you want to know how ‘insane’ a Governor could be when provoked then visit Port Harcourt and meet with Nyesom Wike.

The former Governor of another oil-rich State, Delta, James Ibori, had deposited millions of Dollars abroad, proceeds of high-wire corruption! Both the late ‘Alams’ and Ibori spent some time in the British jails for graft-related offenses. Today, while Alams is six feet below Ibori is still grandstanding in Delta state politics. He still sees and fancies himself as the last surviving godfather in Delta State.

No shame or contrition whatsoever! Ever since he was freed by the British judicial system and he returned to Nigeria Ibori has been playing godfather politics imitating Asiwaju Bola Tinubu in Lagos. While it is arguable that a Governor in Nigeria can never serve his people without stealing their fiscal resources, democracy dividends and development suffer when scarce resources are invested in unproductive schemes or ventures.

It is unbelievable that Gov. Diri could have released the South African legislator’s nudity to the public. Somebody else must have done that! Whether the Governor ordered it or not is open to questions. The Governor could defend himself by saying that he never knew the SA woman from Adam! Even if that is a lie he is bound to continue defending himself if only to placate his wife or mitigate the damage to his reputation. Adultery is still a moral crime before God and man!

Politicians in general and Governors in particular in Nigeria are very good at playing sex games, sometimes well beyond our boundaries. Having amassed great fortune through high-wire corruption they enjoy their lives to the fullest while the guber party lasts, leaving the rest of us to continue ‘wailing’ and gnashing our teeth over lack of basic amenities and services.

They junket around the globe by first-class flight tickets with a retinue of aides, mistresses and concubines! With a junketing President in the Aso Villa they try to outdo one another on useless foreign trips.

You have those hooked to some bibulous binge like the former Anambra State Governor, Willie Obiano. And others attached to sexual exploits. Sexual predators abound in the broken system marked by unmitigated mediocrity! Yet they try very hard to hide their true colours even masking their kleptocratic indulgence.

The South African politician named her lover as “Douye Diri”. Or do we take it here that there is a mistaken identity problem or mix-up somewhere? Two or three people can bear the same name. Just like the late Abba Kyari that worked under President Buhari as the Chief of Staff and the incarcerated ‘super-cop’ Abba Kyari the criminal con-man/drug baron. The woman never mentioned Governor Diri even though the name she mentioned sounded very much like that of the Governor.

Between the randy Governor and his lawmaker-lover in SA the truth ought to be exposed in the interest of both parties. Using a third party (the Niger/Delta militants) to threaten SaharaReporters that exposed the story or the irrepressible Publisher, Comrade Sowore, or Deji Adeyanju is not the best way to go about it all. Governor Diri must come clean on the allegation.

While open threats and intimidation cannot settle the issue of the day we believe it is in the best interest of the Governor to address the weighty allegation and prove his innocence. Otherwise, we would conclude that he must have resolved to do ‘damage’ to the woman for one misdemeanour or ‘love crime’ or the other. The ball remains in his court!

He must tell Bayelsans in particular and Nigerians in general how and why he sought love across the border. Why and how he became a ‘lover-boy’ at his age! (Even Felix Lebarty, the famous lover-boy/musician, is no longer called lover-boy as his age advanced). And how and why his responsibility as the Chief Executive of a state permitted him the time to engage in romantic fantasies outside our shores.

The abhorrent spectacle watched online by millions, Zanele Sifuba’s nudity, may be Governor Diri’s nudity as well! He must clarify issues bothering on betrayal of trust and love in this regard.

His graveyard silence in the face of the weighty allegation from his mistress in Madiba-land cannot be considered ‘golden’ anymore. His exposed ‘nudity’ must be covered by nothing but the truth, the whole truth!

OPINION: Between Tinubu, Atiku – who is the unifier?