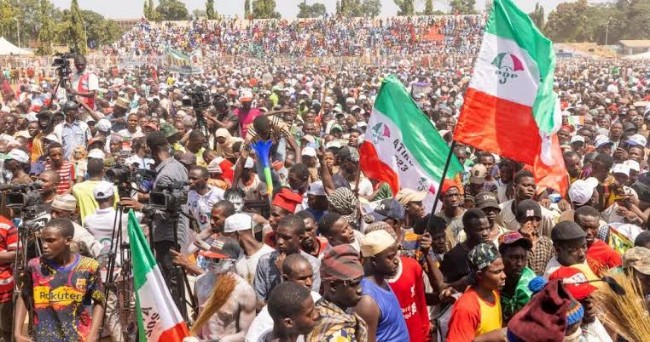 The Peoples Democratic Party (PDP) has accused the ruling All Progressives Congress (APC) of plotting to disrupt its presidential campaign rally scheduled for Akure, the Ondo State capital, on Wednesday.

In a statement on Tuesday issued by PDP’s National Publicity Secretary, Debo Ologunagba, the party claimed it had uncovered plans by the APC to import thugs from Kogi and other places and station them at strategic locations along roads and intersections leading to the PDP campaign rally venue in Akure town to attack the PDP members and other Nigerians.

“The APC, having lost all foothold in Ondo State and dazed by the increasing popularity of the PDP and our presidential candidate, Atiku Abubakar, over its deflated candidate, Asiwaju Bola Ahmed Tinubu, has resorted to violence in a desperate bid to disrupt the PDP Presidential Campaign Rally in the State.

“The PDP is aware of plots by the APC to import thugs to attack PDP members similar to the dastardly acts the APC perpetuated against the PDP in our Kaduna and Borno States rallies.

“The APC leaders are reportedly bragging that the APC-led Ondo State Government had bribed commercial road transporters in the state not to provide transportation to the PDP members and supporters so as to frustrate their movement to the venue of the PDP presidential campaign rally.

“The PDP states clearly that it cannot be deterred by the APC’s plots, which will be firmly resisted by the people of Ondo State. The people, having gone through excruciating seven and half years of pains and hopelessness under the APC are now in total support of the PDP and Atiku Abubakar.

“We, therefore, urge Governor Rotimi Akeredolu as the Chief Law Officer of the State to call his party members to order as he will be held responsible should there be any attack on the PDP members or breakdown of Law and Order before, during and after the PDP presidential rally in the State.

JUST IN: Court sentences IGP Baba to three months in prison for contempt