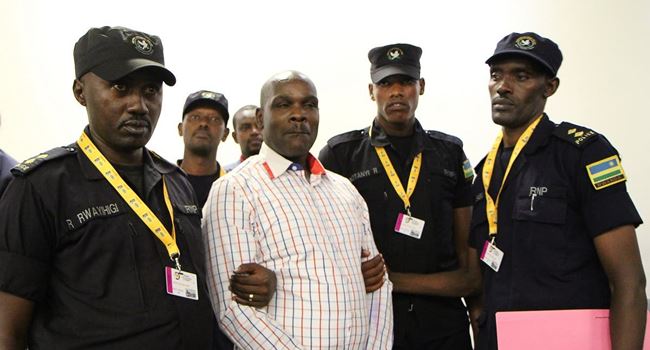 A court in Rwanda has sentenced a former politician and ex-mayor of Nyakizu, Ladislas Ntaganzwa to life in prison for plotting to exterminate Tutsis and ordering the killing of more than 25,000 people.

Ntaganzwa was found guilty by the court of orchestrating the killing of tens of thousands of people during the 1994 genocide in the country, a court spokesman said on Thursday.

The Tanzania-based International Criminal Tribunal for Rwanda, informed that Ntaganzwa at the time addressed the surrounded Tutsis and told them to lay down their arms. Then he gave the order for the massacre to begin, “whereupon the gendarmes and communal police shot at the crowd”.

“We plan to appeal because evidence in the hearing was based on witnesses’ testimony but that was not enough as some witnesses were contradicting themselves. We are not happy about this lengthy life jail term,” Musonera told the Reuters news agency.

This came a day after Rwandan genocide suspect, Felicien Kabuga, who was nabbed while living under a false identity in a flat outside Paris, France on Saturday after 25 years of being on the run, declared that the accusations against him are “lies”.

Kabunga is alleged to have been one of the main financiers of ethnic Hutu extremists who killed 800,000 people. They were targeting members of the minority Tutsi community, as well as their political opponents.

Reuters reports that when he was asked if he understood the charges, Mr Kabuga replied, via an interpreter: “All of this is lies. I have not killed any Tutsis. I was working with them.”

His lawyer, Laurent Bayon said the results of a DNA test used to identify him should be annulled as he had not given consent.