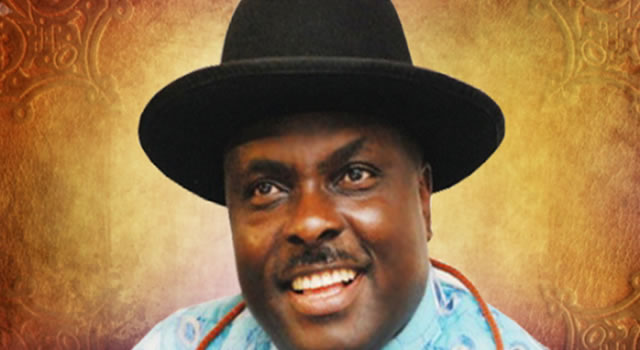 Nigerians on social media Tuesday clamoured for the return of the UK remitted loot of former governor of Delta State, James Ibori worth £4.2m to Niger Deltans.

The loot, which was reportedly recovered by Ibori’s family and friends, would be handed over to the Federal government following a Memorandum of Understanding (MoU) signed by the British High Commissioner to Nigeria, Catriona Laing and the Attorney General of the Federation, Abubakar Malami (SAN).

The Nigerian government said the recovered loot would be used to fund the construction of the Lagos-Ibadan road, Abuja-Kaduna road and the second Niger Bridge, but Nigerians heavily protested the decision.

That money should be returned to delta state not the FG period.

Hehehehe…to be looted again by Ibori through his stooge.

Former governor of Delta state, Mega thief, James Ibori looted £4.2million while his people are blaming Hausa and fighting for Biafra. Now that Buhari recovered the assets the idiots are saying it should go to the state so it will be looted again.

No administration will. Na same same

Football fans were far from impressed on Tuesday with coach Gernot Rohr’s 24-man selection for the Super Eagles AFCON qualifiers against Benin Republic and Lesotho scheduled for 27th and 30th of March respectively.

Concerns were raised over the team’s chances at an impressive play with captain Musa listed who has been out of action since October after exiting Saudi Arabia club, Al-Nassr.

Seriously, Ahmed Musa shouldn't be on the list….he should be in camp to motivate the boys….he hasn't played competitive football for over 3months, I believe..that denied us another active player..the Team shld be about form players….not impressed!

Nigeria coach Gernot Rohr releases his 24 man Super Eagles squad to face Benin Rep & Lesotho in #AFCONQ . Paul Onuachu who has 24 goals in 28 games for Genk this season is the ‘surprise’ omission. pic.twitter.com/RCmHodbZor

Paul Onuachu having scored more goals this season than Messi, Ronaldo, Kane, Salah and Haaland in Europe is placed on the standby list by Genort Rohr.

Even if Ahmed Musa is not with a club for five months, na still the team's captain.
Even if Rohr no go use am, his presence na moral booster for the team.
The most important thing is, @NGSuperEagles beat Lesotho and Benin well.

Congratulations were in order on Tuesday for Tonto Dikeh’s ex-husband Olakunle Churchill, who welcomed a son with his newest wife, Actress Rosy Meures.

The controversial Nigerian business man took to his Instagram page to announce the birth of his first son with Rosy, revealing that the child would be named ‘King’, the same name as Tonto Dikeh’s five year-old son, King Andre.

Tweeps who founds Churchill’s decision a petty move, dragged the new dad for trying to deliberately incite trouble with Tonto.

If Tonto should start now they will say she is crazy, she likes trouble. What in the absurdity?

They did Tonto Dirty sha it's now looking like he needed her for spotlight when he knew who he was 100% for. E be like nollywood movie

He knows what he is doing.

It was probably one tweet too far for Ex BB Naija Star, Uti Nwachukwu, whose take on the Meghan and Prince Harry situation sparked outrage among social media users on Tuesday.

In the tweet, the reality TV star said he will never condemn his family to support his spouse, even if they were the worst people on Earth.

“Family first! Always! You see this love thing, if it makes you turn your back on your family, then, hmmm, watch out,” Uti wrote.

He was however bashed for stating that even if Clifford Orji, the infamous cannibal and serial killer was a member of his family, he would never join his wife against his first family.

Once U get married, a new family is formed. The 2 other families are now extended and you must do everything to put your new family first always. That's what the first line means. If each one puts their old Clifford Orji family first, the new one is gone. Common sense no common https://t.co/400uGVjh6G

Hello Uti,
So you'd sacrifice truth on the altar of family or consanguinity?
That's how 'they killed his mum' ffs!!! And you think Diana didn't tutor the boys about the Royal family??? She did!!!
Never sacrifice truth for anything bro!!!

Same Uti Nwachukwu that refused to leave the Big Brother Africa house back then in 2010 (when news of his father's death reached him) is the Uti saying family first? https://t.co/fSGJJJJTtM

What Uti Nwachukwu said is tantamount to saying if he belongs to Clifford Orji's or James Nwafor's family or any notorious killer out there, he would support them because they're family. Let's condemn evil when we see it. Support Harry/Meghan without citing stupid analogies.

What Uti Nwachukwu was just trying to say is that u should support your family no matter what cos blood like they say is thicker than water, which I don’t see anything wrong with that but using Clifford Orji as an example in his context was just too much for people to look past.

The thing about this Uti Nwachukwu gist is that IF HE EVER decides to get married,Twitter would remind the Wife that He'd choose Family over her. Even family as bad as Clifford Orji.
Omo E choke o

Uti Nwachukwu probably went too far with his illustration using Clifford Orji. What the man is trying to say is simple. Get family approval before marriage so that everyone is happy at the end of the day. pic.twitter.com/maIthdNNcz