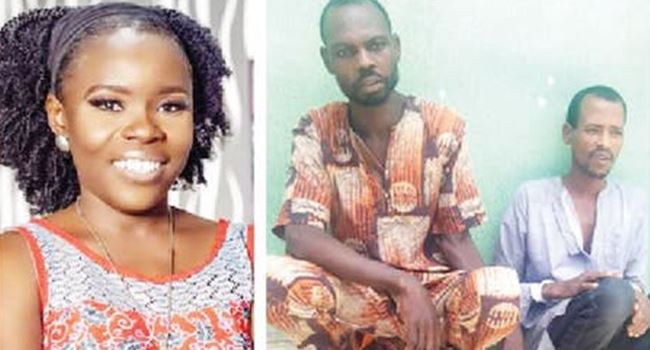 The Oyo State Police Command on Wednesday confirmed the arrest of two suspects, Abubakar Mohammed and Ayankunle Ayaleye, who allegedly kidnapped a female farmer in the state, Modupeoluwa Oyetoso.

The suspects also allegedly killed Oyetoso’s fiance, Opeoluwa Oladipo during the operation in the Lanlete area of the Ibarapa East Local Government Area of the state.

The state Police Public Relations Officer, Gbenga Fadeyi, who confirmed the development to journalists on Wednesday, added that a Tecno phone and a single-barrelled gun used for the operation were recovered from the suspects, in addition to N22,500, which was part of the ransom paid to secure Modupeoluwa’s release from captivity.

According to the state police spokesman, efforts were being made to arrest two other fleeing members of the kidnap syndicate.

“Information reaching me on the kidnapping case at Odo-Edu Igbodudu Road, Lanlate, Ibarapa East Local Government Area of Oyo State, where one Modupeoluwa Oyetoso reported that her fiancé, Opeoluwa Oladipo, was shot in a Toyota Highlander SUV and she was kidnapped, has revealed that two suspects, Abubakar Mohammed, 30, and Ayankunle Ayaleye, 37, have been arrested in connection with the case.

“The sum of N22,500, which was part of the ransom collected, was recovered in addition to one Tecno phone and a single-barrelled gun used for the operation. Efforts have been intensified to arrest two other fleeing members of the criminal gang”, Fadeyi said.

The PPRO also confirmed that the victim had identified the suspects as her abductors.

He said: “The officer-in-charge of the Anti-Kidnap Unit of the command said she was there on the day they were interviewing the suspects and she identified them.”

Miss Oyetoso and her late fiance were reported to have been returning from the farm when four men waylaid them around 5pm. Oladipo allegedly shot while attempting to manoeuvre his way to escape.

NPDC to raise production to 500,000 barrels per day –Kyari