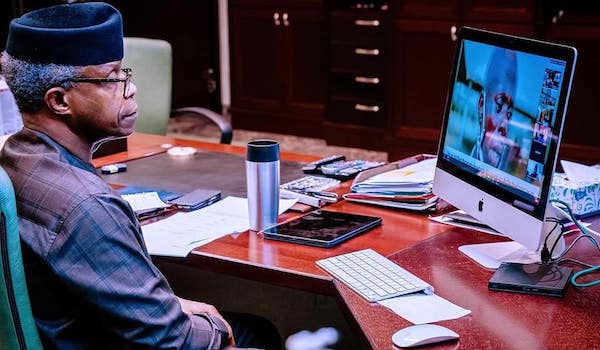 Vice President Yemi Osinbajo said on Tuesday the problem of post-harvest losses due to poor storage of the nation’s agriculture produce would soon be a thing of the past.

Osinbajo, according to a statement issued by his Senior Special Assistant on Media and Publicity, Laolu Akande, said that improving the working and trading environment for small and medium-sized businesses through shared facilities, Micro, Small and Medium Enterprises (MSMES) clinics and other government interventions were critical parts of the Federal Government’s drive towards supporting MSMES in the country.

Speaking at the virtual inauguration and handing over of the 200,000-capacity Yam Storage Facility at the Zaki Biam International Yam Market in Benue State, the vice president disclosed that post harvest losses recorded by farmers due to poor storage of the nation’s agriculture produce would be a thing of the past if more storage and processing facilities like the new storage facility in Benue State were established around the country.

Osinbajo said: “The market has had very little storage capacity and its infrastructural facilities are way behind its capacity and the size of commerce that goes on here daily.

“Besides, post harvest losses have been the bane of agricultural production in Nigeria: Nigeria produces 17 million tons of yam annually, but loses up to 40 percent on account of inadequate storage and processing facilities

“Following discussions between the federal government’s MSME Clinics project, the Benue State government and market stakeholders, it was unanimously agreed that this 200,000 capacity Yam Storage Facility should be located right here in Zaki Biam, Benue State.”

He said President Muhammadu Buhari was excited about the inauguration of the facility.

“A major concern for him has been that the COVID-19 crisis does not in any way disturb agriculture and the food supply chain.

“That we are able to commission this project in the midst of the pandemic is especially heart-warming for him,” the vice president added.

Related Topics:BenueOsinbajoyam storage facility
Up Next

One day after meeting with governors, FG insists no going back on autonomy for state legislature, judiciary