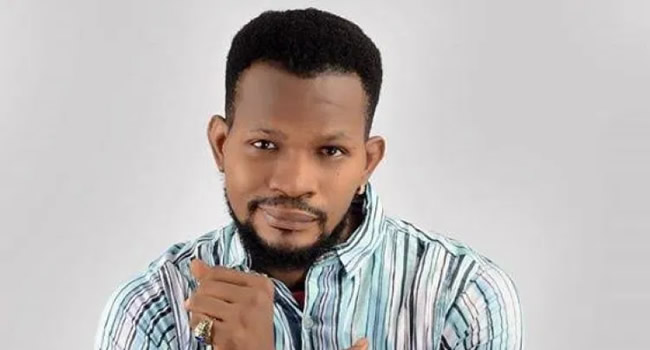 On Monday, April 19, Nollywood actor, Uche Maduagwu took to social media to retract his claim that he was gay. His revelation is coming barely three months after he came out to claim he was a member of the LGBTQ community.

Maduagwu’s statement on Instagram fell on deaf ears as people rarely cared about what he had to say.

Everyone moved on like it didn’t mean a thing; well, did it?

Maduagwu‘s gay narrative can be affiliated with the old tale of a man who cried wolf. The character ran into the village to lie about being chased by a wolf; when his clansmen came out to rescue him and he garnered their attention, he laughed and told them it was only a joke.

One day, the wolf finally came and ate the man; despite crying for help, no one believed him because he was a renowned attention seeker and jester who only wanted to be relevant through clout chasing.

In a similar vein, Uche Maduagwu is a clout chaser who is setting himself up for irrelevance in society and most certainly a mediocre career, should he continue to depict characteristics of an adolescent who is starved of attention.

Prior to his needless gay confession earlier in the year, Maduagwu had a reputation for berating celebrities, musicians and actors alike. He oftentimes criticises the works of others, meanwhile, to this day, it is tedious to mention his contribution to the movie industry.

In January 2021, when the controversial Nollywood actor took to Instagram to affiliate himself with the gay community, he wrote, ‘Proudly gay’.

He didn’t stop there, he went further; “Appreciate others and #share only love we need to respect peoples choices; not to judge them so lets practice Jesus kind of love,” he wrote.

He had people’s attention, the Nollywood actor stood out at least for a moment.

At the time, he became the first Nollywood actor to openly make comments about being gay. Although there have been speculations about certain celebrities practising homosexualism, no one ever had the effrontery to come out of the closet.

For a moment, everyone wanted to hear what Maduagwu had to say.

His revelation came immediately after the #EndSARS protest, which saw members of the LGBTQ community campaign against the Anti-gay Law signed by the former President of Nigeria, Goodluck Ebele Jonathan in 2014.

It was a period where the gay people urged for freedom of expression. As a matter of fact, a lesbian movie titled Ife (Love) was recently released at the time; hence, for a moment, the LGBTQ community thought Maduagwu’s status as a celebrity could help intensity their quest for equal rights in a homophobic society.

Unfortunately, it wasn’t going to be.

Maduagwu failed to make quality use of his 15-minutes of fame. The Nollywood actor was only teasing his followers.

After months of sharing photos of himself wearing a red bra here and there, the transvestite came out on Monday, April 19 to retract his gay claim.

“Dear fans,
I am not Gay. I lost movie roles, endorsement, and my girlfriend fighting for LGBT right in Nigeria.”

“Omg, even my girlfriend left me despite knowing I was fighting for LGBT right in Naija but I no regret using my celebrity status to fighting (sic) for this beautiful community”, he added.

People could care less about his sudden u-turn. The majority of social media users were indifferent about his statement, everyone moved on about their day.

What Maduagwu could have done differently

Uche Maduagwu should never have come out as gay. Since he knew that he was telling lies and playing on the intelligence of his audience, his career as an actor doesn’t require it.

He should have continued to hone his skill as an actor and technicality as a moviemaker. Maduagwu isn’t an A-list actor, therefore, he still has a lot of work to do on himself and his career.

Clout chasing is fickle and forgettable, but a profound career will etch the name of the artist in the heart of the recipients, audience or prospective customers.

It is pivotal for Maduagwu to go back to the drawing board and restrategize his career path, it will aid him in numerous ways.

Like the man who cried wolf, nobody cares about what Maduagwu has lost since his false gay claim a couple of months ago. The actor mentioned that he lost his relationship, endorsement deals and movie roles, people could care less.

There is a place to draw the line; toying with the emotions of the sensitive gay community is not ideal.