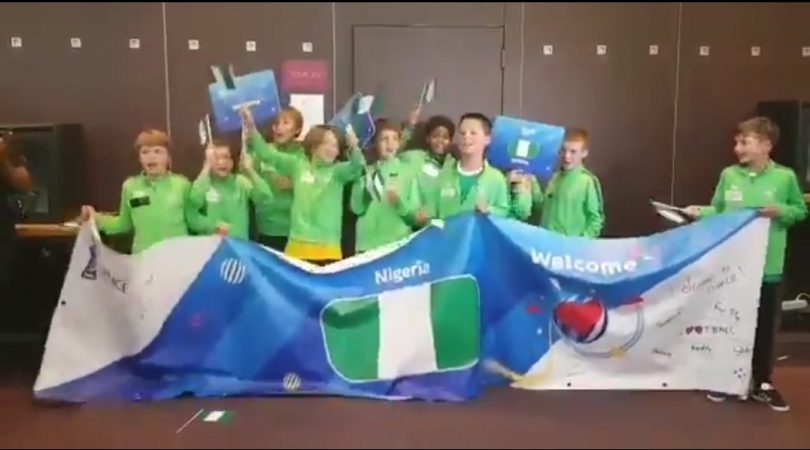 Nigeria’s Super Falcons have arrived in Reims, France, where they will abide during the 2019 FIFA Women’s World Cup, which kicks off on Friday.

The team, led by Thomas Dennerby, left their Austria camp earlier today (Tuesday) to the host nation of the global showpiece, and arrived to a warm welcome by residents of Reims.

In a tweet by the team’s official handle on Tuesday night, Falcons were welcomed by a group of singing children, carrying a banner that had the Nigerian flag printed on it.

💃💃⚽We received a warm reception from our host city @ReimsWWC2019 at the Hotel Mercure Centre Cathedral, our new abode in Reims this evening. We're excited to be here for #FIFAWWC. #SoarSuperFalcons #Team9jaStrong @thenff pic.twitter.com/Zv7ySNXsiH

That was not all. The Super Falcons hit the dancefloor with the kids and danced to the tune of some Nigerian songs.

💃💃Super Falcons hit the dance floor after being treated to a Nigerian music at a warm reception in Reims this evening. #FIFAWWC #SoarSuperFalcons #Team9jastrong @thenff pic.twitter.com/yTqinznM9R

The nine-time African champions have been drawn in Group A alongside hosts France, Norway and South Korea.

They will kickoff their World Cup campaign against Norway on Saturday, June 8, before facing South Korea and France in matchdays 2 and 3 respectively.

The 2019 FIFA Women’s World Cup is billed to hold between June 7th to July 7th.