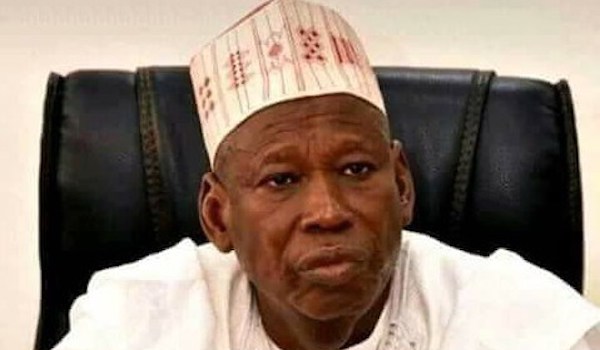 The Governor of Kano State, Abdullahi Umar Ganduje has explained that he’s stepping on the poster of his predecessor, Rabiu Kwankwaso, during a political rally in the state on Saturday, was unintentional.

A picture of Ganduje stepping on Kwankwaso’s poster at a mega rally of the APC on Democracy Day had gone viral on social media, generating so much controversy as many accused the governor of mischief.

Ganduje was the deputy of Kwankwaso throughout his eight years in office but both men fell apart shortly before Ganduje became the governor.

Speaking through the state Commissioner for Information, Muhammad Garba, the governor noted that the action was unpremeditated.

Garba said no matter the political misunderstanding and differences, it has never been the character of Ganduje to belittle any political leader.

He said while the issue has been twisted by some “injudicious elements who are busy parodying the scenario for their egoistic interest”, it would become a big wound to the conscience if facts are misrepresented.

Giving an account of what happened, Malam Garba said, “During the event, which was organised as part of activities marking this year’s Democracy Day, two former gubernatorial candidates and many members of the Kwankwasiyya defected to the APC.

“When Governor Ganduje was called to the podium, the former Kwankwasiyya members lined up on the way to applaud and pay their allegiance to the governor.

“Some of the members who abandoned the Kwankwasiyya movement at the event were downplaying pictures of the former governor, one of which, dropped on the red carpet as Governor Ganduje walked his way to the podium, and unknowingly stepped on it,” he said.

The commissioner emphasised that Ganduje is known to many as peace-loving, tolerating, and harbors no grudges to influence such act.

Related Topics:GandujeKwankwasoKwankwaso’s poster
Up Next